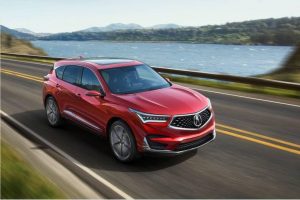 The all-new, third generation RDX has been reengineered on a new, Acura-exclusive platform featuring a lighter and dramatically stiffened body, a sophisticated new chassis and an all-new powertrain – a powerful, yet fuel-efficient 2.0-litre DOHC VTEC® Turbo engine mated to a segment-first 10-speed automatic transmission. The 2019 model also will mark the return of Acura Super-Handling All Wheel Drive™ (SH-AWD®) to RDX, in its most advanced form yet, giving RDX the most sophisticated and capable torque-vectoring all-wheel-drive system in its class.

“The all-new RDX delivers a powerful statement about who we are and where we are headed as a brand,” said Emile Korkor, Senior Manager & Brand Leader of Acura. In creating the new RDX, Acura designers worked from the foundations of the Acura Precision Concept, adapting its low, wide and sleek presence to a five-passenger SUV. The new RDX Prototype boasts more athletic stance and proportions with a wider track (+3 cm), longer wheelbase (+6.3 cm) and shortened front overhang, with wheels pushed to the corners.

The new design flows outward from Acura’s signature diamond pentagon grille, with RDX being the first model designed from the ground-up around the brand’s bold new face. The distinctive front fascia is married to a sharply sculpted body with sharp and dynamic character lines and all-LED exterior lighting featuring the next-generation of Acura Jewel Eye™ LED headlights.

The RDX takes power from a new 2.0 litre, 16-valve DOHC direct-injected engine with a low-inertia mono-scroll turbo and DOHC VTEC™ valvetrain and Dual Variable Timing Cam (Dual VTC), delivering 40 percent more low-end torque than the outgoing RDX. The new engine is mated up to a segment-first 10-speed automatic transmission (10AT) that responds quickly to the will of the driver, with crisp and refined shifts that capitalize on the 2.0-litre engine’s flat torque curve.

The new Acura RDX will utilize the next generation of Acura SH-AWD® featuring a newly developed rear differential with a 40 percent increase in maximum torque capacity relative to the outgoing RDX, making it the most advanced and capable torque-vectoring all-wheel-drive system in the segment.