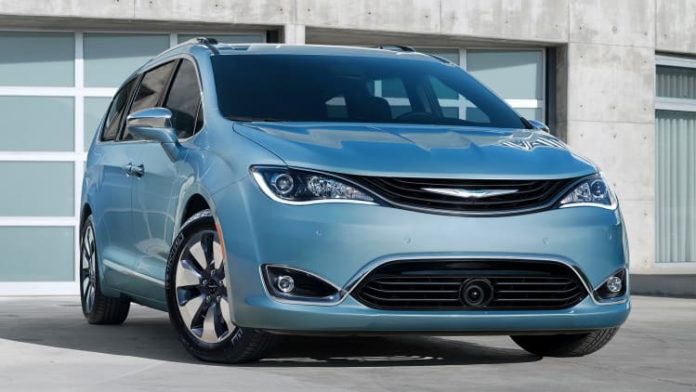 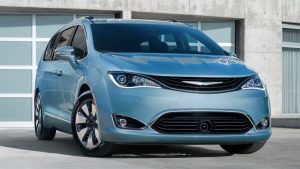 Chrysler, or FCA (Fiat Chrysler Automobiles has long dominated the Minivan segment with its   70 per cent share. No mean feat, as its Dodge Caravan offering were always good at providing superb value. FCA’s newest incarnation of the Minivan is the new Pacifica model, a clean cut, modern looking vehicle that’s available in either a gas engine or for a first in the Minivan world – a hybrid model.  The non-hybrid model, which is powered by a 3.6-liter V-6 producing 287 hp and 262 lb-ft of torque, is mated to a nine-speed automatic transmission. However, the flagship Hybrid model is a fully loaded plug-in hybrid with a lithium-ion battery and an Atkinson cycle version of the 3.6-liter V-6. With help from two front electric motors, total system output is 260 hp. The 2017 Pacifica plug-in hybrid comes with a continuously variable automatic transmission (CVT), and has an EV-electric mode range of about 50 – 57 kilometers, depending on factors such as driving style, vehicle load and accessory power drain, terrain and other factors. To recharge for around 50-57  kilometres of electric-only range, the Pacifica takes about 14 hours with normal Level 1 household current, or as little as two hours with the more powerful Level 2 240-volt system.  Chrysler claims the Pacifica is the only seven-passenger vehicle with a range of up to 850 km.   The Hybrid trim line is very well equipped with feature such as: ample power outlets, USB ports, an 8.4-inch centre-console screen featuring FCA’s Uconnect infotainment system and navigation, 10-inch seatback touchscreens, power sliding doors and liftgate, as standard. There is a plethora of on-board storage and all the power features you could want. A fully equipped dash with multiple touchscreen displays show you everything you need to know with regards to the Hybrids operating system and is fully customizable.

The new seven-seat, 260-horsepower Pacifica will be priced at $56,495, However, it qualifies for numerous rebate programs such as the $14,000 credit from the Ontario Electric Vehicle Incentive Program,  and similar rebate programs in British Columbia ($5,000) and Quebec that can drop its list price. With the Pacifica’s combination of style, space, performance, luxurious, well-appointed interior and practicality, Chrysler is off to a great start in taking on the mantle of the Caravan. More upmarket, classier, and a segment leading first with the Hybrid version, the Pacifica, despite its name is kicking up a storm! A recommended top buy if you are looking for a luxury Minivan.