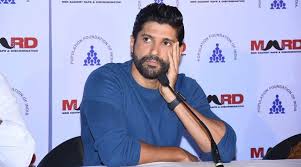 Mumbai (PTI): Actor Farhan Akhtar on Wednesday said that women in the film industry should speak up about harassment as the debate around gender-based discrimination has intensified all over the world.

The Harvey Weinstein scandal in Hollywood has put the spotlight on the sexual harassment prevalent in the entertainment industry but in Bollywood not many people open up about casting couch or workplace harassment.

Farhan, who runs MARD (Men Against Rape and Discrimination), has tied up with director Feroz Abbas Khan and Population Foundation Of India, for ‘Bas Ab Bahut Ho Gaya’ campaign.

“… if someone has an incident or a story to share, this is the perfect environment, world over, for you to come out and share it. You will be doing yourself a favour, other women a favour and even other men a favour… There have been young men, who have said that they were abused,” Farhan told reporters in Mumbai.

“It is important for women who have been subjected to this to speak out. I think wherever there is an industry, wherever there is power dynamics at play, be it the corporate world or the films, there will always be these issues, unfortunately,” he added.

The actor said everyone in their mind will be supportive of women to come out “speak names and tell the truth”.

When asked that not many speak up about these issues as they fear retribution, Farhan said it is not always true.

“The one thing that I can tell you about the film industry is that there is no question of anyone getting out of films and not being taken into work because they have come out and spoken honestly about something.

“They will always find work, if, and there is a slight ‘if’ that applies to everybody to those who have never been harassed and to those who have been the fact is that it is all about demand and supply… It has nothing to do with that (speaking out).”

Farhan said people who have opened up have always found support.

Farhan, along with other musicians, will hold a ‘Lalkar’ concert on November 21 to create awareness about harassment.