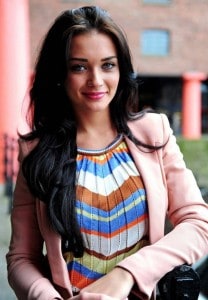 Mumbai (PTI): Actress Amy Jackson has appeared in a new campaign for People for the Ethical Treatment of Animals (PETA) to promote vegetarianism.

In the poster, the 25-year-old actress can be seen dressed in plastic wrap and impaled by a metal hook to perhaps suggest the violent bloodshed of the animals that occurs to obtain meat for consumption purposes.

The tagline for the ad reads, “Hooked on Meat? Go Vegetarian.”

The ad, which is being released in advance of World Meat Free Day (June 12), was shot by top photographer Abhay Singh.

Talking about the idea behind the campaign, Jackson says, “(M)eat products can cause cancer, heart disease, obesity. So for cutting all of that out… it’s just a no-brainer that we’re going to be a lot healthier,” says Jackson.