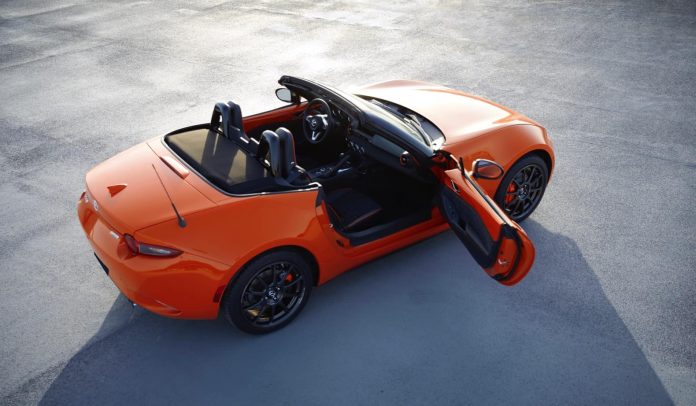 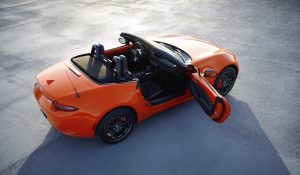 HIROSHIMA, Japan: Mazda Motor Corporation recently showcased the global unveiling of the Mazda MX-5 Miata 30th Anniversary Edition at the Chicago Auto Show. After 30 years and with more than 1 million examples sold, Mazda feels that the MX-5 is no longer its own creation. It belongs to the fans around the world who have supported the development of the model. To express its gratitude, and its high hopes for the future of the MX-5, the company developed Racing Orange, an exclusive body color that evokes the breaking dawn of an exciting new day. In addition to the new color, the MX-5 Miata 30th Anniversary Edition features forged aluminum wheels (Rays ZE40 RS30) developed exclusively for the MX-5 in cooperation with Rays Co., Ltd. and a 30th Anniversary badge that displays the model’s serial number. Sales will be limited to 3,000 units worldwide, including both soft-top and retractable hardtop models.

Mazda will continue to make cars that exceed expectations and provide driving pleasure in everyday driving situations. The company aims to build a strong bond with customers and become an indispensable presence in their lives.

Immediately following the global reveal at the Chicago Auto Show, a website for the 2019 Mazda MX-5 Miata 30th Anniversary was flooded with reservations for the celebratory vehicle. Within one-hour Mazda fans had reserved half of the U.S. allotment of 500, with 100 of those units secured in less than 15 minutes. Within four hours, all 500 of the 2019 Mazda MX-5 Miata 30th Anniversary allocated for the U.S. were claimed, and a waitlist for the vehicle continues to grow. “Our Miata fans are truly remarkable. We are humbled by their devotion to our joyful roadster,” Masahiro Moro, president and CEO of Mazda North American Operations, said. “Our goal, as always, is to pay tribute to the important people and fans that have been part of the Miata’s incredible journey.”

Mazda plans to premiere the 2019 Mazda MX-5 Miata 30th Anniversary in Europe at the Geneva International Motor Show on March 5, 2019