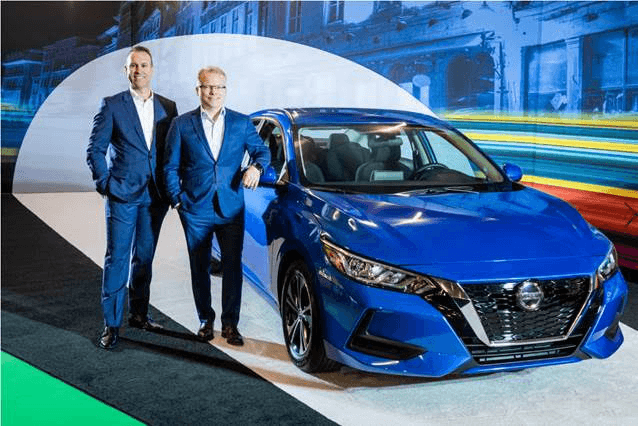 Nissan recently announced   at the Montreal International Auto Show (MIAS) Canadian pricing for the all-new 2020 Sentra compact sedan, which has a starting M.S.R.P. of $18,798. The all-new Sentra’s grade walk is a straightforward offering of five models and no packages – S, S Plus, SV, SR and SR Premium. All Sentra models are equipped with a new, fuel-efficient 2.0-litre DOHC 4-cylinder engine, producing 149 horsepower and 146 lb-ft of torque, an increase of 20 per cent and 16 per cent respectively versus the previous generation.

. The exterior also incorporates Nissan’s latest design language found on its other dramatic sedans, including its signature V-motion grille, thin LED headlamps and floating roof. Sentra also features new wheel designs and a slate of new colours, including three new two-tone colour combinations. Inside, the all-new interior of Sentra is more refined and luxurious, creating a high-quality experience for driver and passengers… The 2020 Sentra also features a new, fuel-efficient 2.0-litre, 4-cylinder engine rated at 149 horsepower and 146 lb-ft of torque – increases of 20 per cent and 16 per cent respectively over the previous generation’s 1.8-litre engine. The Sentra is available in either a 6-speed manual transmission (base S model only), or with the latest generation Xtronic transmission.