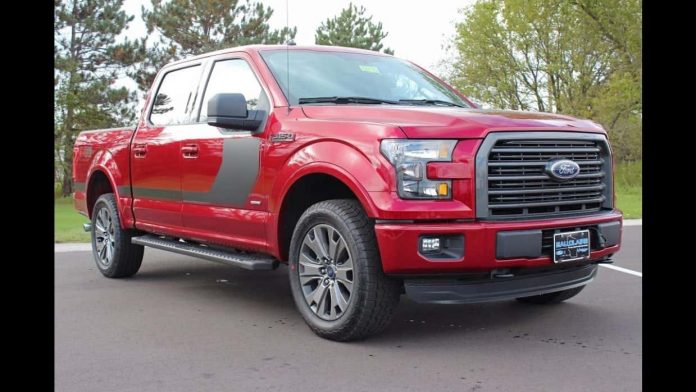 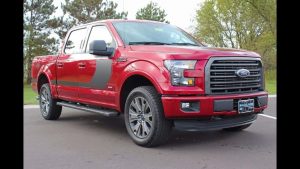 For 2017, the biggest change in the Ford F-150 is the availability of the new 3.5-litre EcoBoost V6 in the current model year. The new engine offers increases in both horsepower (Up 10 to 375.), and torque (Up lb.-ft to 470 from 420). Also offered is a new Stop-Start auto off and on mode. More changes are expected next year on the F-150, with a revised front fascia, and yet another new engine, said to be a turbo-diesel V6 unit.   The exterior of the 2017 F-150 features Fords wide “Built Ford Tough” stance, prominent wheel arches, large elaborate light housing and a chiseled chrome bedecked grille. It’s one hell of a good looking truck

The Lariat Special Edition package as fitted to our four –door SuperCrew tester also included: 20 inch dark painted wheels, box side steps, tailgate step, Active park assist and a spray in bed liner. Attractive red accents on the grille, badges and cool black stripes and hood decal were also offered. Our tester rolled in at a $56,199 base price, but rolled out with $17,970 worth of options and delivery for a whopping $75,869 final tally.

Several ground-breaking new productivity features debuted in the current generation F-150, including many class-exclusives. They include:    360-degree camera view, using exterior cameras to create a bird’s-eye view of the truck to help the driver park, maneuver in tight spots and navigate down narrow roads and trails.  The 3.5-liter EcoBoost engine features a lightweight, compact design to deliver the same power as some mid-range V8s.Towing capacity of up to 12,000 lbs is on offer with F150 with a payload of 1,526 lbs. in the rear bed

On the road, the new Ecoboost is a revelation – sounding like a V8, the V6 has impressive acceleration and stays strong, providing ample power throughout the  with almost all the 470 lb.-ft. available at the 3,500 rpm spot. This translates into complete power for full load and trailer applications. The new 10-speed automatic transmission is also a great improvement over the old six-speed unit with smoother, more seamless shifts. The four extra gears do help in maximising engine efficiency for whatever the weight being pulled. The selectable Sport and Tow modes on the ten speed tranny also help in acceleration thanks to new gearing and transmission programming.

Not hard to see why the F-150, with its huge range of body styles, engine choices and options is the most popular pickup truck ever. The Ecoboost SuperCrew is highly recommended