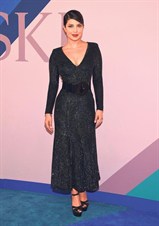 New York (PTI): Priyanka Chopra made one of the most glamorous entries to CFDA awards in stunning black sequin dress by designer Michael Kors, whom she called a true “gentleman”.

Taking to Twitter, the 34-year-old actress shared a picture of herself along with the famous couturier and thanked him for designing the outfit.

“Thank u for a lovely evening @MichaelKors you’re an absolute gentleman. @CFDA,” she captioned the picture.

Earlier today she tweeted, “Dear NYC, are you ready for this tonight with @MichaelKors for #cfdaawards.”

She also posted several pictures on Instagram that showed the “Quantico” star posing alongside actor Armie Hammer and his wife Elizabeth Chambers.

Priyanka has recently made her Hollywood debut with “Baywatch”, that also features Dwayne Johnson and Zac Efron.