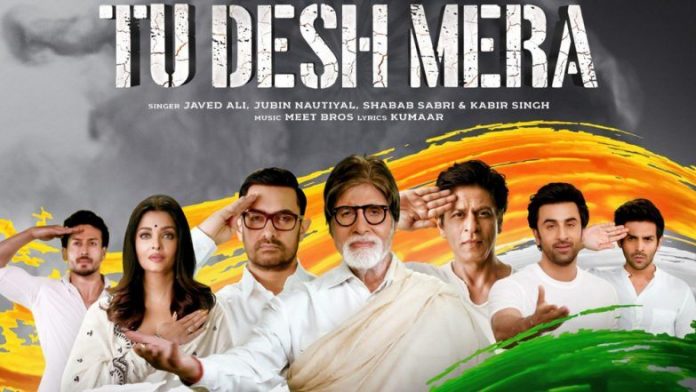 The Pulwama Attack that happened in February 2019 this year left the entire nation in a state of shock. Lives of over 40 CRPF personnel were lost in a suicide bomber attack on a convoy of vehicles with CRPF jawans sitting in them. To pay tribute to the fallen heroes, a special song has been shot with many Bollywood stars and now, it is being reported that Shah Rukh Khanhas also shot for the same. The song, ‘Tu Desh Mera’ is a tribute to the Pulwama martyrs and many stars like Amitabh Bachchan, Aishwarya Rai Bachchan, Tiger Shroff and others shot for the video.

Now, as per a report in Times Of India, Shah Rukh Khan has also shot for the same. The report stated that Shah Rukh had shot the video at a studio in Mumbai just ahead of this travel plans. The makers of the video were full of gratitude for Shah Rukh to join the special initiative for the Pulwama martyrs. SRK shot for a 4-minute sequence for the video last week. As per the report, the producers had followed up with SRK about the shoot and after shooting for the sequence, Shah Rukh told them that he was glad to be part of the shoot.

As per Abhishek Mitra, MD of the Happy Productions, “To say that we were excited by the prospect of Shah Rukh Khan joining us for the video is an understatement. He was travelling that week and was quite busy. We are grateful that he took out the time to shoot for the video. We shot Shah Rukh’s part of the video at the Mehboob Studios in Mumbai after midnight.” Shah Rukh’s verse in the four-minute-long video sequence comprises of some emotional line

THE following are preliminary voting results of the BC provincial general election of Saturday, October 24 from the initial count, according to...
Read more

Coquitlam RCMP looking for Nolan Godron who is unlawfully at large

COQUITLAM RCMP are looking for the public's help to find a patient who is unlawfully at large after leaving the Maples Adolescent...
Read more