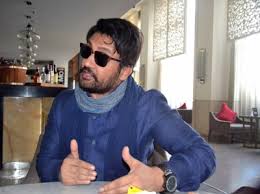 Mumbai (IANS): Veteran actor Shekhar Suman,
whose son Adhyayen was once dating actress
Kangana Ranaut, has hit out — in a cryptic tweet
— at a “cocained actress” who has “fallen flat on
her face”.
He didn’t take any names but through a tweet
sent out on Monday night, he commented: “One
cocained actress was carrying the burden of her
non existent stardom. She has fallen flat on her
face and how. Guess this is poetic justice.”
The actor’s tweet came after the release of Kangana’s
latest film “Rangoon” — a Vishal Bhardwaj
directorial which hasn’t elicited the response the
team was hoping to get.
Adhyayan and Kangana had a bitter split, and
just last year, Adhyayen had made explosive revelations
about his ex girlfriend, saying he was
“abused verbally and physically”.
Shekhar’s cryptic tweet received flak from Twitteratis,
who felt his comment was a dig at Kangana,
a National Award winner who has delivered
impeccable performances in films like “Fashion”,
“Queen” and “Tanu Weds Manu”.
In his defence, Shekhar tweeted: “I’m horrified
at the paid lackeys and sycophants who have
jumped in defence of a lumpen so-called star.
Shame on you, you paid Twitteratis.
“I meant someone totally different but I guess
guilty minds are forever conscious. Please don’t
jump to conclusions. I never named no one. No
one is mocking no one. Just chill. The game begins
now.”
Adhyayan defended his father against trolls
which followed his comments.