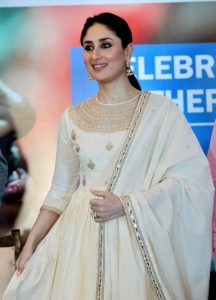 New Delhi  (PTI): As the world celebrates Mother’s Day, actor Kareena Kapoor Khan gave a special mention to all the fathers, including husband Saif Ali Khan, for their unwavering support.
The 37-year-old actor, who welcomed her first child, Taimur (now 17 months) with Saif in 2016, said a father’s role is equally important as that of the mother’s in raising the child.
“I chose to celebrate Mother’s Day with you all. But my son is celebrating Father’s Day with Saif and it has been possible because of that support,” Kareena said at panel discussion on UNICEF’s #EveryChildAlive campaign here.
“I’d really like to thank Saif… I was extremely exhausted after childbirth. First thing is you want to put your child on your chest, your breasts… To give warmth to the child. With my eyes half-shut, I would say, ‘Saif, put Taimur on your chest. Give him that kangaroo love’.
“When the mother is recuperating from childbirth, the father must step in. Today, we must champion those fathers. A shout-out to them as their help is important in the well being of the child,” she added.
The actor, who is UNICEF’s Goodwill Advocate, said the couple ensures that their son is taken care of by either of them.
“We need to share the load. Of course, what the mother can do the father can’t. But then there are a lot of things a father can bring to the table that a mother can’t. Taimur loves his time with his mother. I spoil him with the warmth and the cuddles. His father is trying to teach him cricket.
“So, there are times when we both try to balance it out. That when he’s not around, I am. If I’m doing a film, Saif tries to be at home. These days, I’ve kind of taken it up as he’s been out shooting for three-and-a-half months to be there for Taimur.”
Kareena said she is fortunate to have a “great support system” in her family and team who help her round-the-clock in raising Taimur.
“In nine months of pregnancy, there were two aspects that I realised are most important for the mother and the newborn. First, being in a safe pair of hands at the time of birth and after. A support team – a doctor, nurse, a midwife, etc. I was blessed to have them. It is not a privilege, it’s a right – no matter who the mother is – to be in a safe pair of hands. Second, a husband’s support to the wife.
“I have a good set of helpers. It would be unfair not to mention them. I would like to thank them. And grandparents are always to the rescue,” she said.
The actor asserted “exclusive breastfeeding for six months” for a newborn to boost his/her immunity.
Sharing her experience, the actor said, “I was nervous and scared as how to get to Taimur to do that. I was worried if the baby will latch on or not. With the support of Saif, my mother and my lactation doctor…
“With their guidance, the experience became easy and joyful. It was only possible through the support system. It’s so important at that stage for the mother to be empowered rather than just laying out on the table.”
Kareena said “love is just the foundation” for a child’s growth but, “We need to build on it to give our newborns a better and healthier future.”
Also on the panel were – ASHA health worker from Uttar Pradesh, Uma Devi, a father from West Bengal Sheikh Mohammad Ali, Dr Omkar Hota from Odisha with Chief of Health UNICEF India, Dr Gagan Gupta.
EveryChildALIVE is UNICEF’s global signature campaign to demand and deliver affordable, quality healthcare solutions for every mother and newborn.