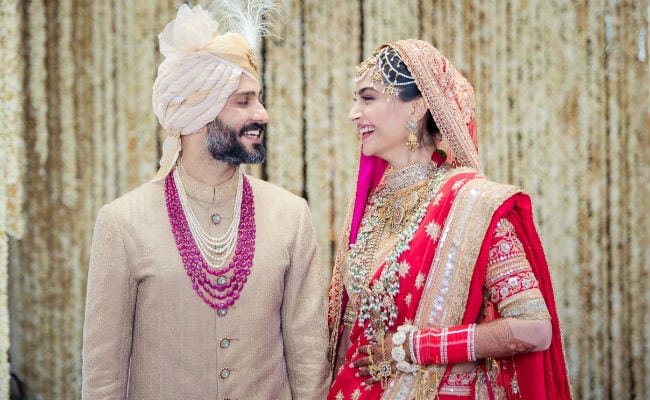 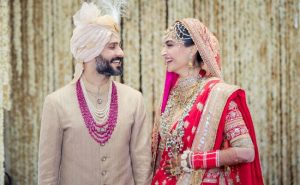 Mumbai  (PTI): Surrounded by her close-knit family, Sonam Kapoor today tied the knot with her longtime beau Anand Ahuja in an intimate yet lavish ceremony befitting a Bollywood star.
True to her image of a fashionista, Sonam looked radiant in a red and golden Anuradha Vakil lehenga choli. The floral attire matched the bride’s blush, while the heavy jewellery elevated her royal look.
Ahuja, a Delhi-based businessman, looked dapper in a beige bandhgala by designer Raghavendra Rathore.
“Forever and ever. Sister love is the truest love I know. Me and Sonam Kapoor-Ahuja,” sister Rhea wrote captioning a photograph from the wedding on her Instagram page.
The couple got married according to Sikh customs, Anand Karaj, at Sonam’s maternal aunt’s bungalow in Bandra, here.
At the ceremony, cousins Arjun and Ranveer Singh sang a hip hop version of Sonam’s chartbuster “Masakali” from the film “Delhi 6”.
Post the nuptials, Sonam made a quick change to a rust-pink lehenga choli and then the couple cut a quirky two-tier cake decorated with toppers that showed a bride dragging the groom out of a basketball court, hinting at Ahuja’s love for the sport.
Harshvardhan distributed sweets to the media with a thank you note on the boxes, post the ceremony.
Sonam’s other family members including uncles Boney and Sanjay Kapoor, Boney’s daughter Anshula, Janhvi and Khushi and Sanjay’s daughter Shanaya and son Jahaan were a part of the celebration.
Megastar Amitabh Bachchan, son Abhishek and daughter Shweta were among the first ones to arrive at the venue.
Karan Johar, Saif Ali Khan, who arrived with wife Kareena Kapoor and son Taimur, Karisma Kapoor, Rani Mukerji, Jacqueline Fernandez, Swara Bhasker, Javed Akhtar, designer Masaba Gupta, Aamir Khan, wife Kiran Rao and elder son Junaid were also spotted at the wedding.
Sonam and Anand, who had been dating for the past two years, announced their wedding barely a week ago. The wedding was preceded by two-day long celebrations that included mehendi and sangeet functions.