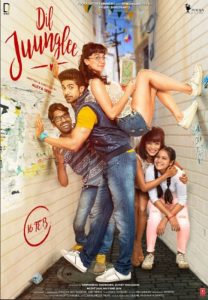 Mumbai (PTI): Actors Saqib Saleem and Taapsee Pannu have been revealed as the leading pair of the film “Dil Juunglee”.

The makers of the romantic-comedy film revealed the lead pair in a fun-filled audition video, titled “Casting for Dil Juunglee”, which also featured actor-producer Jackky Bhagnani.

Actors Nidhi Singh, Abhilash Thapliyal and Sristi Srivastava round off the cast of the film, which is written and directed by Aleya Sen, and produced by Deepshika Deshmukh, Bhagnani, Mudit Jain and Mayank Jain.

Presented by Pooja Entertainment and Dinesh Jain, the film will release on February 16, 2018.