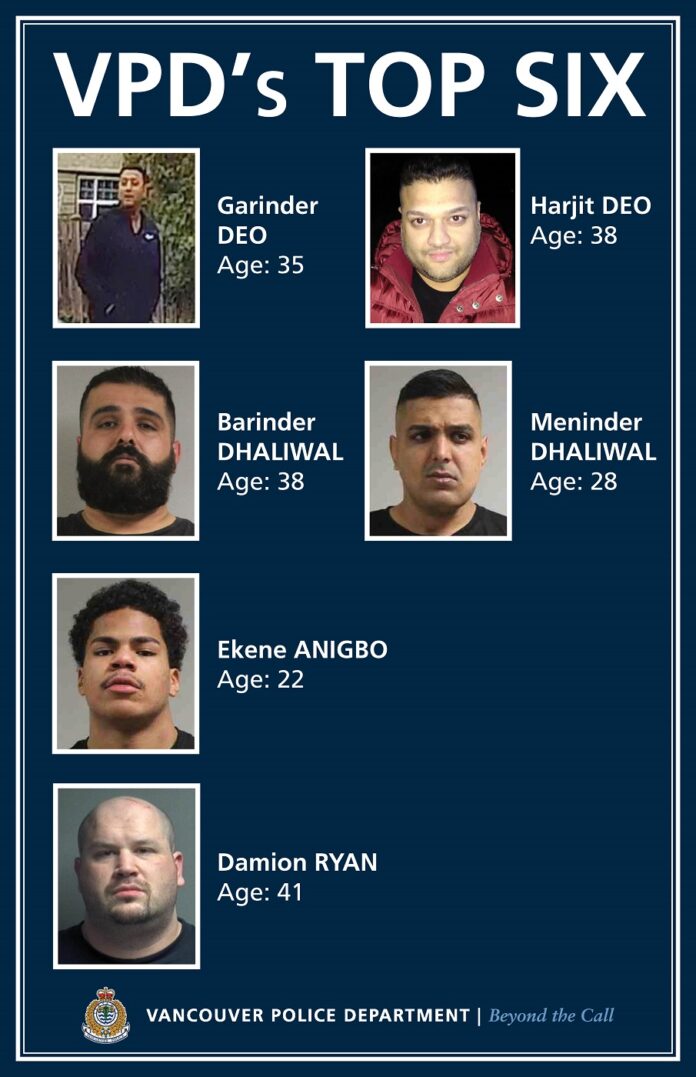 VANCOUVER Police on Monday released the photos, names and ages of six gangsters with links to Vancouver who pose a significant risk to the safety of the public.

“Gang violence continues to be a prominent public safety issue in Metro Vancouver. There have been numerous reckless, brazen acts of violence that threaten the safety of innocent bystanders,” said Vancouver Police Chief Constable Adam Palmer. “I want all Vancouver residents to know the faces of these individuals and to keep their distance from them.”

“Our police intelligence leads us to believe that the individuals we have identified today may be targeted by rival gang members,” adds Palmer. “My greatest concern right now, related to the ongoing gang violence, is that an innocent bystander will be hurt or killed during a shooting targeting a gangster.”

In addition to raising public awareness about the threat to public safety, Vancouver Police have initiated a new taskforce to deal with the escalating gang violence. ‘Taskforce Threshold’ was officially launched on May 12. It consolidates resources and expertise from the VPD’s Investigation and Operations divisions to help prevent gang violence and investigate incidents if they occur.

The taskforce will pull together detectives from the Major Crime and Organized Crime sections and tactical officers from the emergency response team, gang crime unit, patrol and other specialized units. In addition, the taskforce will provide all frontline patrol officers with regular briefings on the gang conflict as it evolves and about any gangsters believed to be residing in or visiting Vancouver.

“Every single patrol officer will know every single player in this conflict,” said Palmer. “They will step up patrols in the city – specifically near the restaurants and businesses the gangsters frequent.”

All public safety agencies are coordinating efforts. Vancouver Police are continuing to share intelligence with and collaborate with other police agencies in Metro Vancouver, including the RCMP and Combined Forces Special Enforcement Unit of B.C. (CFSEU-BC).

Vancouver Police remind the public to report any suspicious activity to police by calling 9-1-1.

Man exposes himself to female student at downtown elementary school