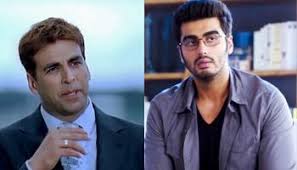 Mumbai (PTI): Arjun Kapoor will be stepping into the shoes of Akshay Kumar for the sequel of “Namastey London” and the actor says he admires the superstar for his film choices.

It was rumoured that Akshay is upset with producer Vipul Shah and the actor for going ahead with the sequel.

In an interview with PTI, Arjun says, “I shot a video for his film ‘Toilet: Ek Prem Katha’ and it negates the speculation. Vipul sir and Akshay were to do a film together but due to time constraints and scheduling problems (it did not happen). Vipul sir offered (the project to) me and I got excited about it.”

The actor is confident that Shah must have discussed the matter with Akshay before approaching him with the project.

“Akshay sir and I get along well and I respect him for what he has achieved and the work he is doing now.”

Arjun, who will feature in “Namastey Canada”, is pumped up about working in the film.

“I think the kind of love ‘Namastey London’ got was immense… Stepping into a franchise is always great as one has to go in with a strong mindset.”

There is buzz that his “Ishaqzaade” co-star Parineeti Chopra will be a part of the sequel but there is no confirmation yet.

The actor recalls watching “Namastey London” along with the leading lady, Katrina Kaif, during one of its screenings.

“I had told her (Katrina), it was her best performance so far. I remember the scene where Akshay sir spoke about India in that scene on the ship. (I believe) The simplicity worked well for the film.”