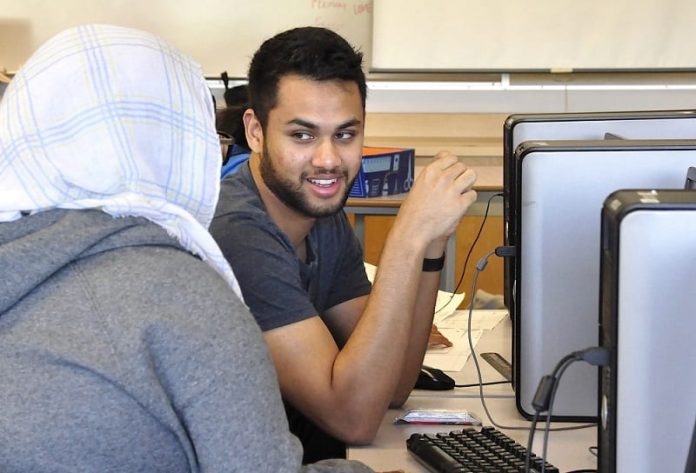 SFU health sciences student Abhi Prasad’s interests are in gerontology and aging populations, but three times a week he focuses on the other end of the age spectrum, with a role that empowers youths.

Prasad is one of more than 100 tutors with SFU’s Friends of Simon (FOS) program, which connects its tutors with students in 15 schools and community centres in Burnaby, Coquitlam and Surrey.

The program began with two schools 12 years ago and now reaches more than 400 registered participants, including a growing number who are new to Canada. Nearly 60 per cent are from Surrey.

A recent survey of middle and high school participants shows nearly three-quarters of newcomer respondents found their FOS participation helped them feel more comfortable in Canada. Another 71 per cent said their education goals had changed due to the FOS tutor instruction and role modeling—up nearly 50 percent from a survey done the previous year.

In addition, 95 per cent of parents felt the program was helping their children do better at school.

Prasad grew up not far from Princess Margaret Secondary, one of the schools he visits weekly. “It’s all about being supportive of these young students—helping them overcome barriers to learning, particularly newcomer students, and also providing encouragement, which they really appreciate,” says Prasad.

“It helps that we’re also closer in age, they feel comfortable around us and frequently ask about what it’s like to be in university, so we give them an idea of what they can expect. Often, it helps defuse the uncertainty.”

Raj Brar, Princess Margaret’s Learning Central coordinator, says the FOS tutors are a great resource for a large portion of the school’s students who are English language learners, looking to gain support beyond what is provided in class. Students are assisted in everything from everything from math and science support to French practice, but the school benefits from their presence in other ways.

“It’s great to see how these student tutors go out of their way to build relationships with our students; it helps create a level of comfort around the challenges they may be having and they also show our students what’s to come, and how to be like them,” says Brar. “We’re grateful for what they bring to our students and we’re seeing some good outcomes.”

University students are trained as literacy tutors at weekend sessions and are supervised by members of SFU’s Faculty of Education. They also liaise to discuss any issues or challenges they may encounter. Tutors also coordinate an annual camp for participants at the Burnaby campus, which recently drew more than 100 youths.

Program coordinators Angela Flumerfelt and Kanwal Neel carry out site visits through the year. “Tutors often talk about seeing that ‘light bulb’ moment, that spark that changes students’ perception about a learning challenge, or even about themselves,” says Flumerfelt, who has been with the program since its early days.

“Some students who don’t see themselves doing post-secondary schooling are introduced to some viable options,” adds Neel, who together with Flumerfelt, coordinates the program within SFU’s Faculty of Education. “Tutors help them with resumes, and suddenly things become possible.”

While many tutors are education students, the role is open to student from across all faculties. Prasad says he often uses his health and gerontology backgrounds to help students—many of whom are picked up from school by grandparents—learn about the importance of older family members, and introduce basic concepts of healthy living, through classroom activities.

He says the role is time well spent. “I felt that if I was going to be spending my time outside of studying doing something, it might as well be helping kids who need a little help navigating school, and life,” he says. “It’s always rewarding to see their self-esteem improve, and their optimism for the future grow. To feel that you are supported can make all the difference for some kids.”