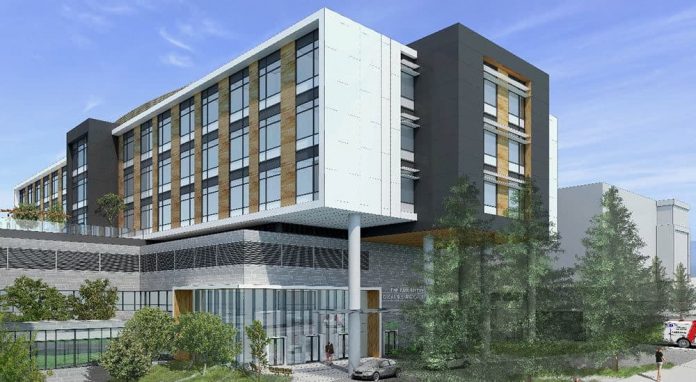 Since the project was officially launched in February 2017 to replace the current and rapidly aging 50-plus-year acute care tower, more than 6,418 donors have supported the biggest health care initiative ever seen on the North Shore with gifts ranging from $25 to $25 million.

“It all began with Paul Myers’ $25 million gift to the hospital,” says Judy Savage, President and CEO of Lions Gate Hospital Foundation. “His exceptional gift inspired our community to really get behind this campaign and give what they could. We always believed that the North Shore would answer our call but we have been overwhelmed with the speed with which the money was raised and the generosity and determination that people have shown to help us get the hospital we need. This is a monumental achievement and we owe a debt of gratitude to everyone who contributed.”

LGH is an important part of the VCH Coastal Community of Care, serving not only the North Shore but also the Sea-to-Sky corridor and the surrounding First Nation communities, the Sunshine Coast, Powell River, Bella Bella and Bella Coola on the Central Coast.

The current LGH infrastructure is aging and outdated, with overcrowded wards and small rooms packed with four patient-beds, which makes it difficult for staff to deliver the best quality health care, as well as maintain optimal infection control with cramped rooms and shared bathrooms. Staff are also challenged with aging operating rooms that are too congested to work comfortably and efficiently.

When it is built, the new Medical and Surgical Centre will be one of the most technologically advanced health care facilities in BC. It will feature:

– A primary care centre to give residents without a family doctor faster access to non-acute services.

Facilities staff at LGH are currently finalizing floorplans and layout of the new centre. With input from patients and medical staff, the team has created a series of innovative life-sized 3D patient mock-up rooms to develop the most efficient room and equipment configuration and design before the RFQ is sent out.

Construction is currently underway on a new energy plant that will power the new Medical and Surgical Centre. Once it is completed, work on the new facility is scheduled to begin in 2020 with completion slated for 2022.

Myers, Leadership Donor, said: “This is very exciting to hit the magic mark of $100 million. We need this facility as soon as possible and I’m delighted that the North Shore community came together to make sure that we have the hospital infrastructure that can support advances in modern health care. Everybody involved in this campaign worked so hard and this is something very special.”

Ryan Beedie, Chair, LGH Campaign and President, Beedie, said: “This is a monumental achievement for the North Shore. When the Medical & Surgical Centre is built it will be one of the most technologically advanced facilities in the province. This has been made possible by the generosity and passion of thousands of supporters who shared in our mission to make a difference and transform care at LGH.”

Karin Olson, Chief Operating Officer, VCH Coastal Community of Care, said: “I would like to thank the outstanding generosity of our LGH Foundation donors for this project and the many others that support our vision to transform the future of care. The new, patient-centred acute care facility will feature innovations and technology that will allow us to care for patients beyond the number of beds and walls of the building.”