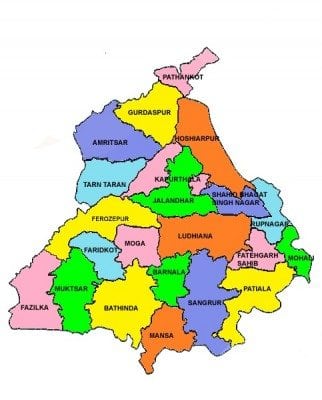 Chandigarh (IANS): The Punjab Police on Thursday claimed it has busted a Pakistan-sponsored terrorist module, Khalistan Gadar Force, with the arrest of one of its members.

“Cracking down on the violence, arson and terror unleashed by the Sikhs for Justice (SFJ) under the guise of Sikh Referendum 2020, the Punjab Police on Thursday busted the Pakistan-sponsored terror module with the arrest of one Shabnamdeep Singh from Patiala,” Director General of Police (DGP) Suresh Arora said here.

“Shabnamdeep was planning to attack police stations/ posts and crowded places in the ongoing festival season. A pistol, hand grenade, CT-100 Bajaj Platinum black motorcycle and letter pads belonging to Khalistan Gadar Force and other banned terrorist organisations have been recovered from him,” Arora said.

“With this arrest, the Punjab Police has blown up Pakistan ISI’s [Inter Services Intelligence] nexus with Gurpatwant Singh Pannu’s campaign for Sikh Referendum-2020, and the conspiracy hatched by ISI-backed SFJ to spread mayhem in Punjab and other parts of India,” the DGP said, giving details of the arrest.

He said the arrest of Shabnamdeep has shown that the New-York based SFJ continues to spearhead and promote the Sikh Referendum 2020 campaign through violence and arson.

“The organisation is patently preying on the poor, illiterate and devout Sikh youth from the Punjab countryside and radicalising them. The youth are being exploited by SFJ, which is using their poverty as cannon fodder to unleash violence and promote secessionist acts in the state,” the DGP said, appealing to Punjab’s youth not to fall into the trap of such anti-national and secessionist forces out to destroy their lives by pushing them into violence and arson.

“Shabnamdeep’s arrest, and that of his associates found to be working for SFJ leaders, has also once again exposed the claims of Gurpatwant Singh Pannu that their campaign for self-determination did not have any room for violence, and that SFJ and its leaders were not funding any terrorist activity in Punjab,” he added.

On May 31, the Punjab Police in Batala had arrested two radical operatives, Dharminder Singh (a Territorial Army soldier) and Kirpal Singh, who had set two liquor vends on fire in Harpura Dhandoi and Panjgrian villages in Sri Hargobindpur block of Batala police district.

Arora said that Shabnamdeep Singh hailed from Daftari Wala Burar village in Samana in Patiala district. He was out on bail in a petty crime case in Rajasthan.

“Shabnamdeep was operating a Facebook account under the fake name of ‘Lahoria Jatt Gill’ with a profile picture of Jarnail Singh Bhindrawale,” Arora said.

“Investigations so far have revealed that in July, he was contacted by one Javed Khan Wazir, a suspected Pakistan Intelligence Officer (PIO), from Pakistan, and was introduced to a Pakistani Sikh ‘Gopal Singh Chawla’. He was further introduced to two other persons, who told Shabnamdeep that they were also supporters of SFJ and asked him to join more associates and propagate Sikh Referendum-2020 in a big way,” the DGP said.

Preliminary investigations by the police have revealed that Shabnamdeep was further introduced to one Nihal Singh who identified himself as a hardcore SFJ operative.

“Nihal and the PIOs started communicating regularly with Shabnamdeep, and kept inciting him to indulge in arson involving liquor vends. They asked Shabnamdeep to videograph such acts of arson and share videos along with details of news reports relating to these incidents,” he said.

Acting on these directives, Shamandeep and his associate set on fire several liquor vends and shacks, along with a house, last month and sent the videos to the three. Shabnamdeep purchased one CT-100 Bajaj Platinum Motorcycle and a new mobile phone with the funds transferred to him by Nihal, police investigations revealed.

Shabnamdeep was also in touch with one Sukhraj Singh, who was indulging in violent activities and was arrested by the Amritsar police recently.

The police said Shabnamdeep and his handlers created a Facebook page in the name of “Khalistan Gadar Force” to popularise the newly-formed terrorist outfit and propagate its actions.

“Javed Khan tasked Shabnamdeep to carry out targeted killings and also promised him Rs 10 lakh [Rs 1 million] for each such act,” the DGP stated.

“In the second week of October, Shabnamdeep was tasked by his handlers/ mentors based in Pakistan to procure a new phone and install a new messaging application for further communication. The handlers promised to provide him pistols and grenades. Around October 24, the pistol and grenade were delivered to Shabnamdeep. He was advised to use this grenade on some police stations/posts and crowded places during the ongoing festival session,” the DGP claimed.