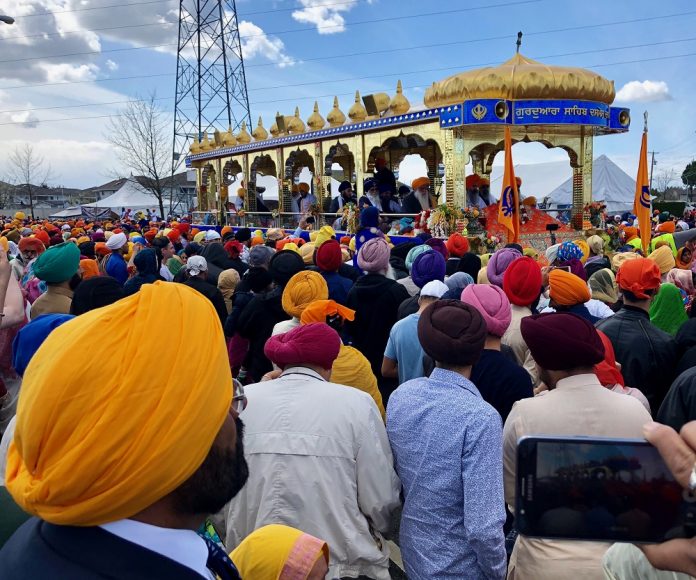 THE 20th annual Surrey Vaisakhi Day Parade is the largest in the world and features a colourful and entertaining procession that will wind its way through the streets of Surrey on Saturday, April 20.

According to the organizers, Gurdwara Sahib Dasmesh Darbar, in total, over 2,500 participants representing over 20 community organizations will participate in this celebratory event, with hundreds of thousands more celebrating this memorable day in roadside booths along the parade route. As part of the spirit of this community celebration, which draws in excess of 500,000 guests from across the region, the roadside booths give away free food and treats to onlookers.
The organizers along with a number of supporting agencies including Fraser Health, the Surrey RCMP, the City of Surrey (including City of Surrey Bylaws office) are reminding businesses and individuals participating in the kiosks and stands along the parade route to observe safe practices. All of these practices and other detailed information, including the parade route map, can be found outlined in detail on the parade website: surreyvaisakhiparade.com.

Your guide to the 2019 Parade procession:

Members of the Sikh Riders, a Lower Mainland based motorcycle enthusiast club will have a number of members riding in the opening procession for the Parade. In BC, Sikhs are legally allowed to ride motorcycles while wearing a turban according to the Provincial Motorcycle Act.

Gatka is a traditional form of Sikh martial arts. Children will be demonstrating the traditional art form.

Parshaad is a traditional Sikh dried sweet that is used as a religious offering. Volunteers from the Gurdwara Dasmesh Darbar Temple will be handing out these offerings to the crowd.

Capturing all the exciting events of the 2019 Parade on camera, Channel Punjabi will be broadcasting live to a global television audience from the Parade route.

With more than 100 members, participants in this parade entry will perform traditional Sikh hymns. These hymns, many of which are hundreds of years old, unite the crowd in celebration.

Traditional Sikh hymns performed by members of the community.

The Khalsa School in Newton will have 500 participants, aged kindergarten to grade 12, in this year’s entry. The Khalsa Schools are private Sikh schools dedicated to teaching the whole child through academic, Sikh religion and cultural classes. The participants from the Newton Khalsa School will perform hymns and traditional dances throughout the parade procession.

Revolution Records was born out of the desire to see more music that reflects and contributes towards social change.

The Sikh community has a longstanding record of armed service that dates back over 100 years, and this year’s parade entry is a salute to the Sikh community’s contributions and sacrifices to military efforts globally.

Students from kindergarten to grade seven will represent the new, Surrey-based private elementary school, Guru Angad Dev ji Elementary, in this float. Following the schools vision statement to “learn, lead, serve”, their entry will encourage a message of love for mankind, humanity and feelings of universal brotherhood.

The Sikh Motorcycle Club was established in 2002 and today has over 90 members.  A number of those members will be riding in the Parade Procession.

Dasmesh Punjabi School located in Abbotsford has built a very impressive school on the foundation of the Sikh faith and the Punjabi language and culture. As a vibrant K-12 school with more than 700 students, they pride themselves on the individual attention that each student receives here. Learning flourishes in a safe and caring environment.

This float will celebrate the Khalsa and its mission to uplift humanity, engage in the provision of equality and human rights, and to ensure a world free from discrimination.  The float is a combination of images and information about the Khalsa and Vaisakhi in both English and Punjabi.

The Mamta Foundation of Canada aims to help children around the world through moral, social, cultural and economic support. Its first project is to help raise funds for the construction of a new building site for abandoned and orphan girls in Jalandhar City, India.

In remembrance of countless innocent Sikhs who lost their lives advocating for equality and the opportunity to determine their own destiny. Each year this float celebrates a different era of Sikh history and the resolve of the community to not only survive, but to flourish as well.

The non-profit organization, the Surrey Food Bank, will be collecting donations of non-perishable food along the Parade Route.

Surrey RCMP celebrates with the community at Vaisakhi Day Parade