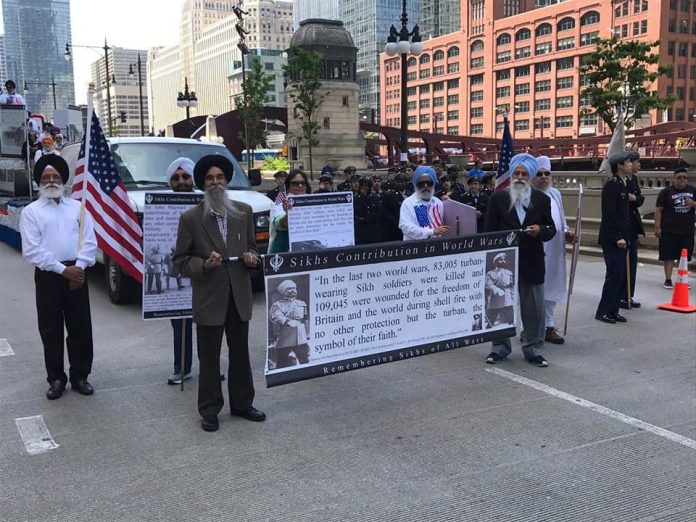 CHICAGO: Sikh American community members of Chicago participated in the 147th Chicago Memorial Day Parade on May 27 with a float, flags, posters, banners and a walking unit to honor and commemorate Sikhs’ contributions in World Wars I and II.
The banners and poster displays on the float featured photos and quotations which highlighted the contributions of Sikh soldiers to the success of the Allied Troops during the World Wars. This was the sixth year that the community has participated in this annual Chicago parade.

The parade began with a wreath-laying ceremony in Daley Plaza where U.S. Representative Tammy Duckworth and Chicago Mayor Rahm Emanuel were present for the ceremony in remembrance of those who made the ultimate sacrifice in defending or protecting our country. Lt. General Robert Walsh, Commanding General, Marine Corps Combat Development Command, and Deputy Commandant, Combat Development and Integration, served as the parade’s Grand Marshal.

Sikh Soldiers who gallantly fought and sacrificed their lives for the success of the Allies in World Wars I and II were part of British India Army. They bravely fought for the allies in France, Belgium, Italy, Israel and many other battle fronts. In the two world wars, 83,005 Sikh soldiers died and 109,045 were wounded while fighting for the Allied forces.
The Sikh participation was cosponsored by Sikh

Respect, honor and remembrance were in the air as Chicago paid tribute to its fallen heroes.

The Chicago Memorial Day Parade honored veterans as well as active duty personnel and drew nearly 10,000 spectators. It commemorated the incredible work soldiers do to protect this country as well as maintain its freedom.

The Chicago parade started in 1870 and is considered one of the largest Memorial Day parades in the nation. Participants in the parade include area high school Marching Bands, Drum and Bugle Corps, as well as many Veterans’ and Civil War Enactment groups, 6,000 JROTC students, and the military with equipment.

The Chicago-land Sikh Americans also participated in another Memorial Day Parade on May 29 in Itasca Illinois, a suburb of Chicago, coordinated by Kuldip Singh Makker. The parade started from Bryn Mawr and Catalpa streets and ended at the Itasca train station. Nearly 2,000 people watched the parade. After the parade, a ceremony was held in Usher Park, where soldiers killed in world wars were remembered. Baldev Singh of Gurnee Illinois announced the name of his uncle, Mohan Singh Gill, who was killed in World War II.
The Chicago Sikh community also participated in

Memorial Day Observance Ceremonies on May 29 at Hoffman Estates Veterans Memorial Cemetery Site and at St. Peter Lutheran Church in Schaumburg Illinois. The program included recognition of deceased military members followed by a moment of silence and musical tributes to military personnel and veterans of the army, marines, Navy, Air Force and Coast Guard.

The ceremonies ended with a picnic in the garden decorated with posters of Sikh Soldiers from World Wars I and II.
Memorial Day has a rich history. It began shortly after the Civil War ended when General John Logan proclaimed that the 30th day of May be designated for the purpose of decorating the graves of soldiers who died. It was first observed