Mumbai (PTI): Zaira Wasim has worked in two big films and bagged a National Award for her performance at the age of 16, but the young Kashmiri actor wants people not to consider her as a role model and rather find their own path. 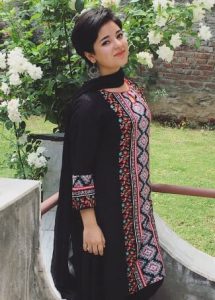 Zaira made her debut in Aamir Khan’s “Dangal”, playing the younger self of wrestler Geeta Phogat, and eventually won the National Award for her performance in Nitesh Tiwari’s biographical sports drama.

“I want to tell people, don’t look up to me. I don’t have that responsibility on me right now. I am not telling you or asking you to do it. Please don’t do it in my name, follow yourself, build your path, create it, invent it. Why do you want to do something which someone else is already doing?,” Zaira says.

In an interview with PTI, she says an undue pressure gets created when people start giving labels and tags.

“I don’t like it when people come and tell me ‘you are an inspiration, a role model’. I am not brave enough to take the blame of your actions. I have seen a lot of girls wanting to be like me but I’d say instead of following my path, build your own,” she says.

“I cannot comprehend the fact that someone can dedicate their aspirations, ideas and dreams to a person’s life which they don’t even know about,” she further says.

Post her big screen debut, Zaira found herself in a controversy after she met Jammu and Kashmir Chief Minister Mehbooba Mufti. The actor was trolled following which she had to apologise.

For any other 16-year-old, coming in this much public scrutiny would have been unnerving, but Zaira, rather than being depressed, was sad about how the media handled the situation.

The actor has put the controversy and the success of “Dangal” behind and has her eyes now set on her next film – “Secret Superstar”.

Written and directed by Advait Chandan, the film chronicles the story of a child who aspires to be a singer.

Unlike “Dangal”, her character in “Secret Superstar” is entirely fictional and to draw references, Zaira relied heavily on Chandan’s instructions and her own experiences.

“I could not personally connect with the character. I come from a very supportive and encouraging family. In this case, it’s absolutely opposite where the father is very hostile, rude and patriarchal…,” she says.

“I am a very bad actor. I can’t pretend and act. So, I would fetch one event or an experience which is remotely connected to the situation on screen. I would look for the closest emotion. If I couldn’t find, then I would build an emotion.”

The film is scheduled to release on October 19, and one would assume Zaira already has more movies up her sleeves and a possible relocation to Mumbai, but she dismisses both.

“I have serious doubts about leaving Kashmir. I wonder if I will ever be able to (leave). The concept of stability is very important for me. If you’re sad, you would know where to go,” she says.

“But if I move to Mumbai, I wouldn’t know anything, +anyone. Even if I do, it’s a very difficult thought for me to leave Kashmir. I don’t think I’ll ever be able.” Zaira says.