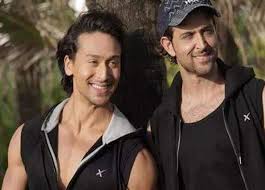 The movie will be helmed by filmmaker Siddharth Anand, who has earlier directed Hrithik in “Bang Bang”.

YRF productions announced the news through its official Twitter handle.

“Bring it on! Presenting @iHrithik & @iTIGERSHROFF in YRF’s next film. Directed by Siddharth Anand. Releasing on 25th Jan ’19 #HrithikVsTiger,” the post read.

The two actors also took to Twitter where they shared cryptic tweets with each other hinting at the plot of the film, which may test their equation as teacher (Hrithik) and student (Tiger).

“A Guru will always have that one trick, he doesn’t teach his student. @iTIGERSHROFF #HrithikVsTiger,” wrote Hrithik.

To which Tiger replied, “Sir @iHrithik. You are my Guru.

But you should know when the game changes. #HrithikVsTiger.”

Director Anand and Tiger are currently working on the Indian remake of Hollywood film franchise “Rambo”.