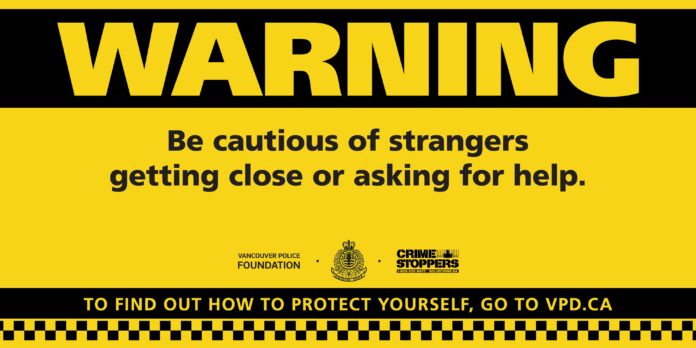 VANCOUVER Police on Tuesday launched a new public awareness campaign, in partnership with Metro Vancouver Crime Stoppers and the Vancouver Police Foundation, to help prevent distraction thefts in the city.

“We work to arm Vancouver residents with the right information, so they can help to ensure their safety and the safety of their family and friends,” said Simi Heer, Director, Public Affairs, VPD. “As part of this campaign, we have arranged for billboards, in four different languages, to be placed in areas throughout the city. Our hope is that the billboards will catch the attention of Vancouverites so they can learn more about distraction thefts and how to protect themselves. We’re thankful to Metro Vancouver Crime Stoppers and the Vancouver Police Foundation for funding the billboards.”

Distraction theft involves a suspect or suspects approaching someone on the street and using distraction techniques to steal their jewelry or other valuables. Suspects may place fake jewelry on the victim and remove the authentic jewelry or come up with a false story about being in distress and try to sell the victim fake jewelry.

“The Vancouver Police Foundation is proud to fund VPD initiatives that help prevent crime in our city,” said Andrea Wright, Executive Director, Vancouver Police Foundation. “We are responsive to the community and the public safety needs proactively identified by VPD members. We provide funding for community outreach and engagement, mental health and addictions, and youth programs, that are led by VPD officers and fall outside of the VPD’s regular operating budget.”

The VPD generally observes a spike in distraction thefts in the summer months. They can be difficult to investigate, as the thieves are usually long gone before the victim realizes what has happened. Victims tend to be older and can be targeted when they are walking down the street, or doing yardwork or gardening. Police believe the thefts are underreported.

The billboards will be placed in 19 different locations throughout the city. They will be available in Chinese, English, Punjabi, and Tagalog. The cost of the billboards is being covered equally by Metro Vancouver Crime Stoppers and the Vancouver Police Foundation.

Anonymous tips can be provided to Crime Stoppers by phoning 1-800-222-TIPS, online at solvecrime.ca, or through the Crime Stoppers’ “P3” tips reporting app.