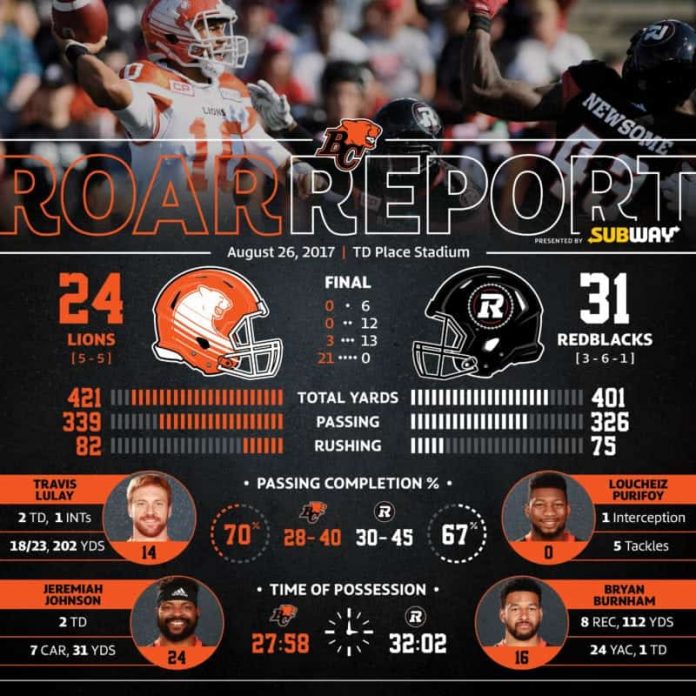 BY MATT BAKER
OTTAWA: It is becoming a similar run of sequels to the Rocky franchise. Only Stallone and company aren’t around to save it. The BC Lions once again sputtered out of the gate en route to their first three-game losing streak in two years.
Travis Lulay and company (5-5) made things interesting in for fourth quarter, but it wasn’t enough in a 31-24 loss to the defending Grey Cup champion Ottawa REDBLACKS (3-6-1) at TD Place Stadium.
“We dug ourselves too big a hole, right? It’s tough on the road playing a team that’s hungry for a win in front of their fans, ” said the 33-year old QB.
“It’s tough to play from behind. We fought like crazy. We had an opportunity to go down and score and we just couldn’t quite get it done.”
Trailing 31-3 at the start of the 4th quarter, Lulay and the offence rallied for 21 quick points before their fate was sealed on an interception with 1:16 to play.
After replacing Jonathon Jennings to start the second half, Lulay threw touchdown passes to Jeremiah Johnson and Bryan Burnham. Johnson also rushed for one to get the comeback attempt started.
Lulay finished 10/17 with 137 yards passing and also had a team-high 37 rushing yards. His work on the ground played a big part in extending drives and putting them in a position to not go down without a fight.
Trevor Harris passed for 326 yards and a touchdown for the REDBLACKS who have back-to-back wins for the first time in 2017.
The home side jumped out to an 18-0 lead at the half before Wally Buono elected to make a change at quarterback for the second time in three games. The CFL’s all-time wins leader admitted it may now be time for a discussion on his starting quarterback after the bye week.
“I’ll take the week to mull it over, but you have to look at what happened today. We can’t afford any mulligans. I’ll sit down with the coaches. At this points I believe Travis did enough to be our starter.”
At 5-5 and falling quickly in the competitive Western Division, one might argue that this bye week comes at a bad time. But you also have to look at the number of guys banged up, as well as the idea that maybe resting and re-focusing is just what the doctor ordered.
“We have eight games left. The West is all discombobulated and we put ourselves in a tough position, ” added Buono.
“We need to regroup, play a lot better football and need to make sure that we win some games.”
“It’s tough coming off a loss and having to think about it, but we’re nine games in and we’ll give guys an opportunity to get healed up, ” added Lulay.
“We just have to come back fresh. We got a lot of football left in this season, so we’ll re-gather ourselves during the bye, do a little self- scout and come back hungry these last right regular season games.”
Next up is a home date with the Montreal Alouettes on Friday, September 8th.

30– the number of completions for Harris. It is the fourth time he has hit that number this season. By comparison, Lulay and Jennings have both failed to have a 30-completion game this season.

158/92- total number of yards after the catch by Ottawa and BC respectively. It was another area where the REDBLACKS were able to make the most of opportunities.

112/101– receiving yards for Burnham and Manny Arceneaux. These two will need to continue to put up these types of numbers if the offence wants to get better.

3– the number of 1st quarter touchdowns scored by the Lions in ten games this season. 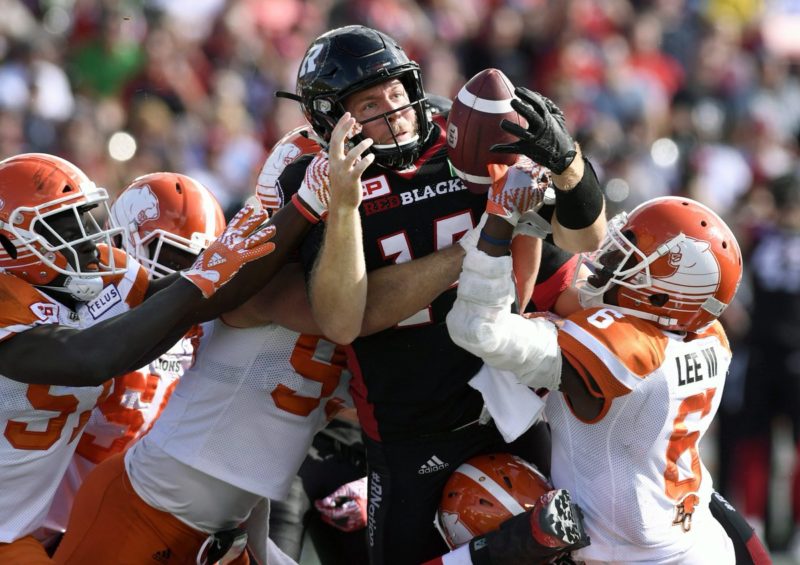 The bluntness of Buono’s answer to the quarterback question should speak volumes. At the same time, it should come with a reminder that whoever starts on September 8th will likely not be starting at some point between now and the regular season finale on November 4th.

What can you say about Lulay? This is a guy who will leave it all out there, no matter how big the deficit or how much time left to play. He took some hits and used his legs when they needed the yardage. Simply put: we all have to appreciate this guy while he’s still in orange. He will for sure want the game-sealing interception back. But he still deserves kudos for rallying his team to a close ending.

The first quarter interception by Jennings was a backbreaker, especially when you consider it came after a massive deep completion to Manny Arceneaux when the offence was struggling to move the ball early. Another big sequence was Ty Long‘s missed field goal that led to a big return and three more points for Ottawa before the half. The math reveals a big six-point swing before the break.

Ronnie Yell‘s interception that set up Johnson’s second touchdown and got them to within seven was a brilliant read. Number 25 continues to perform well as he approaches the one-year anniversary of breaking his foot in Toronto.

Harris had way too much time to navigate the REDBLACKS offence in this one. It speaks to Ottawa’s pass protection and the fact the Lions’ defensive unit needs to improve the amount of pressure they get on the quarterback.

In closing: it would be more concerning if the leaders in that room weren’t delivering their messages to the young guys. This was probably the most angry the locker room has been since the start of last season. And that should be considered a good thing.