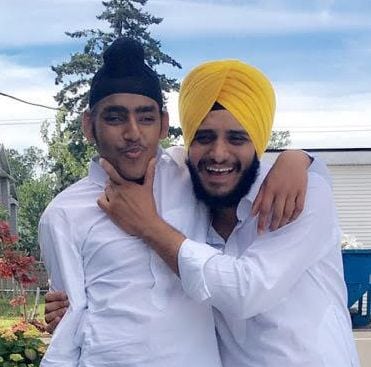 THE community is in mourning over the loss of two young men, aged 16 and 24, who drowned in Harrison Lake last Sunday (September 3). The two, Harkirat Brar, 24, and Gurbinder Dhaliwal, 16, were uncle and nephew.

A Gofundme page, set up for Harkirat Brar, 24, (https://www.gofundme.com/brar-family-support-fund) had collected $25,332 of its $40,000 goal by Thursday morning and South Asian media are trying to spread the word around.

The Gofundme page states: “Harkirat Brar was a young and hardworking boy that came to Canada from India for a better life after his father had passed away. Harkirat came here as a student to further his education. Harkirat was doing very well in the construction industry and was eventually able to get his sister here on a student visa and mother here on a visitor visa from India. Late Sunday, Harkirat and his family were spending the day at Harrison Hot Springs when the tragedy hit. Harkirat was 15 metres into the lake when deeper water struck and he was unable to get himself out. Please help support this young boy’s mother and sister with funeral and living costs after their tragic loss. Harkirit will be deeply missed by everyone. He will always be remembered as hardworking and loving to everyone in his life.”

AGASSIZ RCMP said that last Sunday, at approximately 6 p.m. they responded to a report of a possible drowning at Harrison Lake near the Village of Harrison Hot Springs. Three individuals were reported to be in distress in the lake. Witnesses were able to pull one of the three to safety. Two young men were last seen approximately 70 feet from the shore. Attempts were made to locate and rescue the two males by witnesses, police and Kent Harrison Search and Rescue, but were unsuccessful.

On Monday, members of the RCMP Underwater Recovery Team had recovered the two deceased males.

The RCMP said: “This tragic loss is a reminder for people of all ages to swim within their limits, use personal flotation devices, and use caution in the water.”