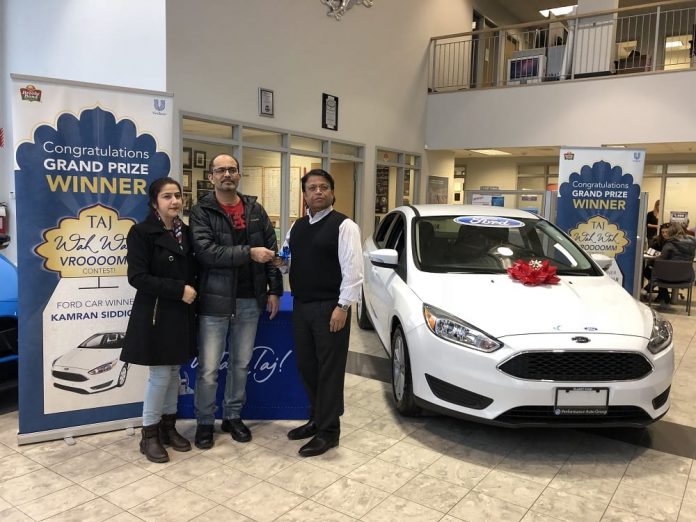 BRAMPTON: The Planet Ford dealership at 111 Canam Crescent, Brampton, was the venue of many happy faces, as winners came to collect their grand prizes in the Taj Mahal Tea Wah Wah Vroom Contest. Kamran Siddiqui won a brand new 2018 Ford car, while others took home airline tickets and gold coins.

The Taj Mahal Wah Wah Vroom Contest was launched in October, and ran until the end of November, 2017. The prizes were exciting, and could be won by just buying and enjoying their favourite Taj Mahal tea, and entering. The Wah Wah Vroom contest was advertised across TV, social media, OOH, print, radio and in the retail space as well.

The contest received an overwhelming response with over 150,000 contest entries. The campaign recorded 80.4 million impressions across all media. Consumer participation also spread by word-of-mouth, as the excitement for the tea brand popularly known as “Wah! Taj” took over. At the prize draw event, 14 lucky names were chosen, and the happy winners notified.

“I didn’t believe I had won, even though they told me when they called,” said a beaming Kamran Siddiqui. “But now seeing this beautiful Ford car, it has finally become a reality!”

His happy wife was also present at the award ceremony and was thrilled with the new sparkling white car. The couple was given the keys, and posed inside the car for the media present at the event.

One of the airline ticket winners was Poorva Bhakkad, who had been making plans to travel back home to see her family, when she got the exciting news that she had won!

“As a brand that is so loved by South Asian consumers, we feel it is our privilege to reward our customers who have stayed loyal to their favourite Taj Mahal tea for generations,” said Partha Guha, Sr. Manager, Marketing & Business Development, Unilever, Ethnic Business Unit, who was present to give out the prizes to the ecstatic winners.