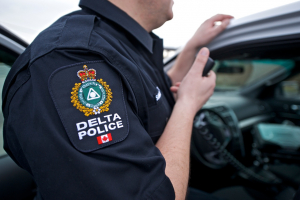 TWO people have been arrested after an altercation and a stabbing that occurred in North Delta on Sunday, April 18 around 5:15 p.m.

The incident is believed to have begun in a parking lot in the 8100-block of 120 Street. There was a confrontation between a driver and a passenger in a vehicle and a male and female walking in the parking lot. During the altercation the driver was allegedly assaulted and stabbed.

The suspects then left the area in a vehicle.

“Delta Police quickly obtained the license plate and description of the vehicle and began an immediate search for it, engaging the assistance of other police forces and integrated units in the Metro Vancouver area,” said Inspector Guy Leeson, Head of the Investigations Section at Delta Police.

Within the hour, police had located the vehicle. Delta Police attended the residence where the vehicle was parked, and took a man and a woman into custody without incident with the assistance of the Lower Mainland District Police Dog Services unit.

The accused and the victim are not known to each other.

The male victim was taken to hospital with non-life threatening injuries, and has since been discharged.

The investigation is ongoing, and police expect to forward charges related to the assault.