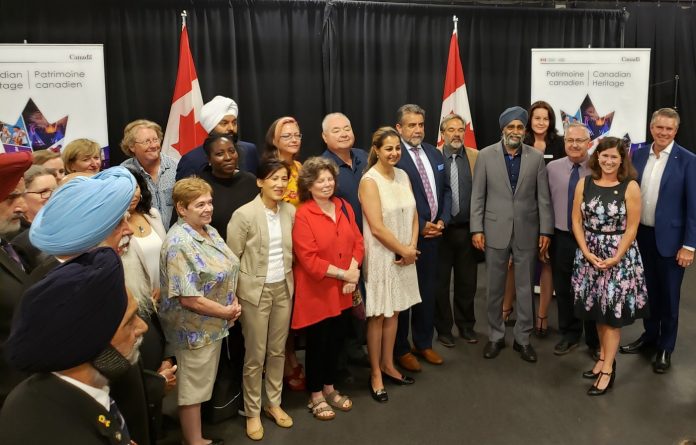 HARJIT S. Sajjan, Minister of National Defence and MP for Vancouver South, on Friday announced investments totalling $3,523,229 in support of multiculturalism, community activities and events, youth programs and anti-racism initiatives throughout B.C. Sajjan made the announcement on behalf of Pablo Rodriguez, federal Minister of Canadian Heritage and Multiculturalism.

This funding, provided through the Community Support, Multiculturalism and Anti-Racism Initiatives Program (CSMARI), will benefit 47 organizations across the province, including the Whistler Multicultural Network, the Arts Council of Surrey, the Immigrant and Multicultural Services Society of Prince George, and the Inter-Cultural Association of Greater Victoria.

The Indus Media Foundation will create a series of short films about the little-known story of Punjabi-Canadians’ contributions in the First World War. The Foundation’s project, Duty, Honour & Izzat, will facilitate the development of partnerships with the heritage sector on creating inclusive programming, while seeing the films delivered across a spectrum of digital platforms that specifically engage children and youth from the South Asian community about their history and heritage. Community workshops and opportunities for dialogue will also be organized to discuss issues of racism, discrimination, equity and media stereotyping.

In June, Rodriguez unveiled Building a Foundation for Change: Canada’s Anti-Racism Strategy 2019–2022, which helps advance the Government of Canada’s vision of fostering and promoting a more inclusive and equitable country for all Canadians. The strategy, with an investment of $45 million, is building on current efforts to create long-term changes in supporting communities and for improved policies, initiatives and practices in our federal institutions. These investments are meant to be the first step of a longer-term commitment and a foundation for change in addressing racism and discrimination in Canada. Applications for new funding opportunities became available on September 3, 2019.

“The opportunity to take part in enriching experiences that celebrate our rich multicultural heritage not only bolsters our community spirit, it breaks down barriers—building a Canada that promotes respect, equity, equality and dignity. Our government is proud to support these projects that support our youth, and promote diversity and inclusion, while addressing issues of racism and discrimination in communities,” said Rodriguez.

“Our government is committed to promoting multiculturalism and celebrating the unique cultural diversity of British Columbia by investing in these important anti-racism projects. It is through increasing the understanding of British Columbia’s diverse communities and their contributions in building our province and country that we can fight intolerance and discrimination. This funding will benefit many organizations, supporting them in the important work they carry out across the province building a more accepting British Columbia,” added Sajjan.

“We are grateful for the Department of Canadian Heritage’s support in shining a light on the significant contributions of the Punjabi community in defence of the Crown and to Canada’s military history. Punjabis can now see themselves reflected positively in the Canadian World War I story—a pivotal moment in the nation-building saga. The story of the unsung heroes of the Punjab (Sikhs, Hindus and Muslims) is likely one of the most unifying and Canadian stories we can tell: it is an untold story of diverse communities coming together with a common goal; it is a dialogue around the ties that bind, and the shared values of courage, integrity and selfless sacrifice. This is a common heritage that establishes belonging and confronts divisive voices to promote a shared future within a multicultural Canada,” said Steven Purewal, Managing Director, Indus Media Foundation.