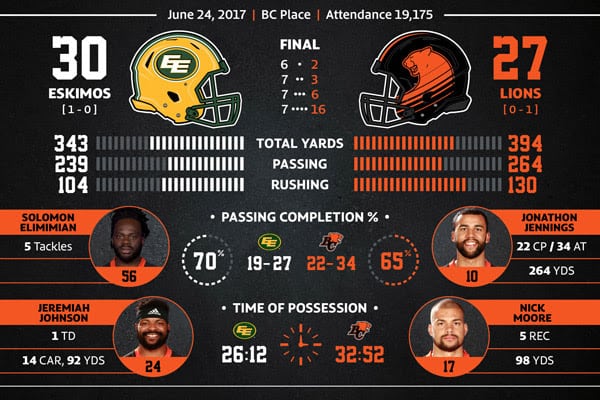 THEY fought to the bitter end, but it wasn’t quite enough against a stingy division rival. Shaun Whyte’s field goal as time expired lifted the Edmonton Eskimos past the BC Lions 30-27 in Saturday’s regular season opener at BC Place.

The winning kick came on the heels of a remarkable scoring drive where Nick Moore’s circus catch set them up on the Edmonton two-yard line before Travis Lulay punched it in. After a missed convert by Ty Long, Mike Reilly and the Eskimos were able to quickly march down the field and set up Whyte for his game-ending heroics.

Jonathon Jennings finished his night 22 of 34 for 264 yards. Jeremiah Johnson scored the only other major for the home side. There was some history made in tonight’s loss as Solomon Elimimian’s five tackles put him in sole possession of the all-time franchise lead, passing Dante Marsh. The Lions get back to practice on Monday in preparation for next Friday’s road game in Toronto, the first of three straight away

from BC Place.
(Matt Baker)