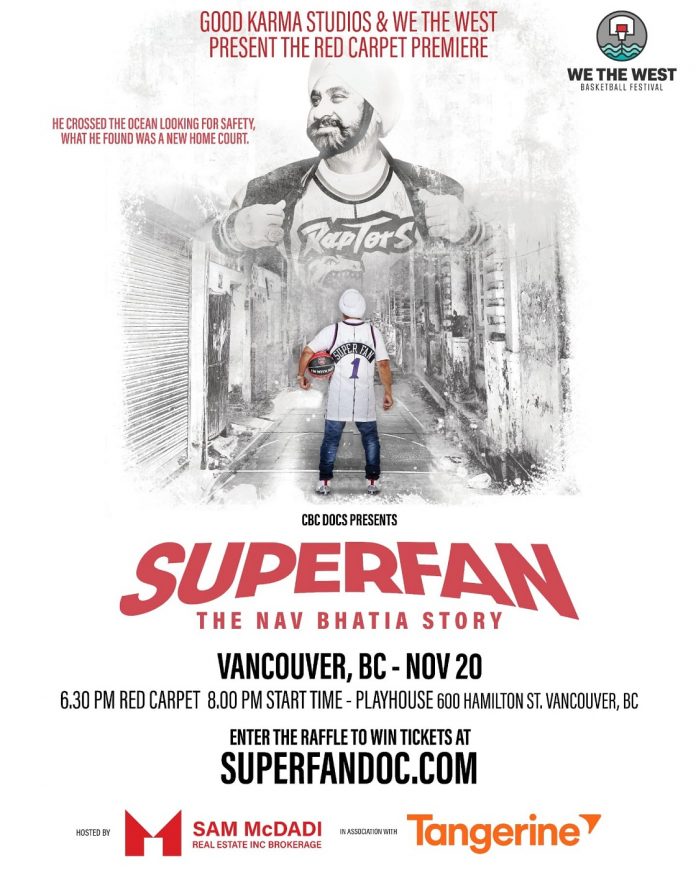 IF you follow the Toronto Raptors in any way then you’ll have heard of Superfan Nav Bhatia before. As popular as any Canadian sports team, Bhatia is known for being the ultimate fan, having attended every Raptors game on home court, ever! Now, for the first time, fans are being invited behind the scenes to learn more about the Superfan himself and his journey.

Superfan: The Nav Bhatia Story chronicles the story of his early life as an immigrant in Canada, to 1995 when he was the guy with a turban and beard at all the games, to becoming pop culture phenomenon, the Raptors Superfan. The documentary includes interviews with family, friends and celebrities such as comedian Russell Peters, NBA superstars Vince Carter and Isiah Thomas and Raptors head coach Nick Nurse, among others.

From players to staff to celebrities – for the past 25 years, people have been asking ‘who is this guy?’ Watching him on the sidelines, his devotion, love of the game and sheer passion is evident. He exudes it. What is also evident is how much he cares about people. If you’ve ever met Nav in person you know he is one of the warmest, most positive and kindest souls you’ll ever meet. With a personality as infectious as his, he draws people in. It’s no wonder that players and fans alike want to run up and say hello, because Nav is truly that special. The team is his family and the court is his second home.

Going much deeper than his moniker Superfan, through this documentary, viewers will learn about what brought Bhatia to this point by following his struggles as an immigrant to becoming one of he most recognizable faces associated with the Raptors franchise.

Having grown up in India, Bhatia immigrated to Canada after anti-Sikh riots erupted across the nation in 1984, in search of a safer environment. However, upon arriving in Toronto, he was hit with a similar but different type of discrimination. He was told he’d have to remove his turban and shave his beard to find a job and fit in, both of which are symbols deeply connected to Bhatia’s Sikh identity. In a new country, he was once again being asked to leave his faith behind, but Bhatia didn’t give in. He eventually found work selling cars, however, he continued to be a target for racism and discrimination because he looked different.

These memories are a far cry from the present day, in which Bhatia is a successful businessman owning four dealerships of his own, but is also the Superfan. He acted as grand marshal for the Raptors’ Championship homecoming parade, was inducted into the Naismith Memorial Hall of Fame, and is the only fan to receive the 2019 Championship ring. The documentary also shares more about the Nav Bhatia Foundation and how the Raptors and Bhatia have worked together over the years to create positive environments for youth and South Asian communities.

To give fans an opportunity to see the documentary before the National Broadcast date, Good Karma Studios is hosting special theatrical screenings of the film across four cities – Vancouver, Victoria, Toronto and Ottawa, sponsored by Mcdadi Real Estate in association with  Tangerine Bank. We the West Basketball Festival will be co-hosting the free Red Carpet Screenings in Vancouver and Victoria on November 20 and 21, respectively.

Bhatia alongside producer Rinku Ghei will be attending the Vancouver and Victoria screenings.

What: Red Carpet Screening of Superfan: The Nav Bhatia Story

9 p.m. Q&A With Nav Bhatia and the producers

Dress Code: Be prepared to strut your stuff on the Red Carpet.

It’s suggested you dress to impress.

How: Those wishing to attend can enter the raffle for tickets at www.superfandoc.com.

Tickets will be awarded at random.

Superfan: The Nav Bhatia Story airs nationally on December 3 at 9 p.m. on CBC and CBC Gem.

From persecution to pride of place at every Toronto Raptors game, SUPERFAN tells the powerful story of Nav Bhatia’s amazing journey and his love story with his favourite team, the Toronto Raptors. Come join us as we follow the Raptors’ success story through the lens of Nav’s single minded devotion—right from their inception in 1995, to their heady and almost unbelievable Championship win in 2019. Get an insider’s look into the mind and world of the man who’s never missed a single home game since 1995, and whose name has become synonymous with that of his favourite team. The documentary examines how the journey of the Toronto Raptors from no-hopers to World Champions in so many ways mirrors Nav Bhatia’s journey as an immigrant.