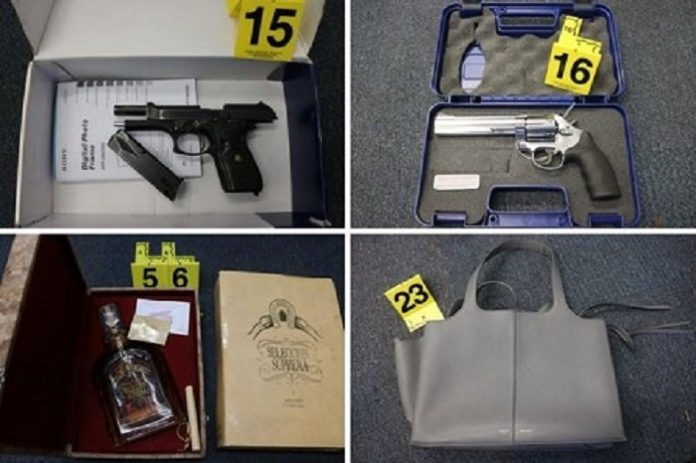 TWO people alleged to have committed break and enters across the Lower Mainland are facing serious charges after being arrested by Burnaby RCMP’s Strike Force Unit last week.

In late April, a break and enter occurred at a residence in central Burnaby while the homeowners were out of the country. Burnaby Strike Force quickly identified two suspects and began investigating. Over the course of the following weeks, Burnaby Strike Force linked the two suspects to a number of other break and enters that had taken place not just in Burnaby but in Vancouver, Surrey and Richmond too.
Last week, on Wednesday, June 19, Burnaby Strike Force along with the Lower Mainland Integrated Emergency Response Team executed a search warrant at an address in North Burnaby. The search warrant resulted in the seizure of two firearms, four imitation firearms, multiple high end handbags, high value alcohol and items linking the two suspects to other break and enters that are alleged to have taken place.

“After recognizing that these suspects were very active across the Lower Mainland, Burnaby’s Strike Force Unit worked around the clock to ensure their investigation progressed to a stage where it could execute a search warrant,” said Cpl. Daniela Panesar . “These two arrests are a prime example of the proactive work being done not just by Strike Force but by each and every unit at Burnaby RCMP on a daily basis.”

Do you recognize these Burnaby mail theft suspects?