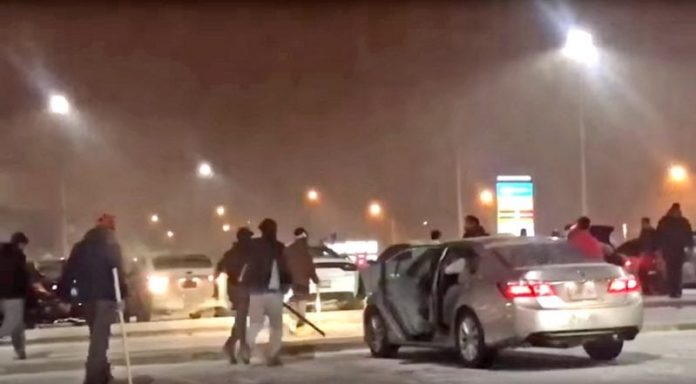 PEEL Regional Police’s investigators from the 22 Division Criminal Investigation Bureau have arrested three males in relation to an incident of assault involving weapons that occurred in Brampton last Sunday.

On December 10, at approximately 10:30 p.m., Peel Regional Police attended a plaza in the area of Steeles Avenue West and McLaughlin Road in the City of Brampton with regards to an assault that occurred in the parking lot.

A 19-year-old male victim suffered minor injuries and was treated at a local hospital.

While the incident was taking place, a number of bystanders recorded the incident and posted the video on social media. The videos garnered media attention and community response ultimately assisting police in identifying people involved.

On Friday, December 15, police arrested Gurpreet Singh, 20, Karanbir Singh, 22, and Harbir Singh, 22, all of Brampton and charged them with one count of ‘assault cause bodily harm.’

“This incident had caused a great deal of concern and attention in the community. Peel Regional Police want to ensure the public that these types of incidents will be investigated thoroughly as public safety is our top priority”, said Inspector Raj Biring, Officer in Charge of the 22 Division Criminal Investigation Bureau.

The VOICE in a story titled “Violence between two groups of young South Asians in Brampton under investigation” on its website voiceonline.com on Wednesday morning was the first to report after speaking with police spokesperson Constable Lori Murphy that police had launched an investigation into the brawl and that there was a 19-year-old victim.

There were reports that the plaza where the fight took place – across from Sheridan College’s Davis Campus – has been a hot spot for crime in Brampton.

Anyone with information regarding this incident, as well as any further mobile video, surveillance video or dashboard video is asked to contact investigators with the 22 Division Criminal Investigation Bureau at (905) 453-2121, ext. 2233. Information may also be left anonymously by calling Peel Crime Stoppers at 1-800-222-TIPS (8477), or by visiting www.peelcrimestoppers.ca or by sending a text message to CRIMES (274637) with the word ‘PEEL’ and then your tip.