THE Integrated Homicide Investigation Team (IHIT) on Wednesday announced that the homicide victim whose body was discovered on Tuesday (October 10) just after 4:15 a.m., in Richmond’s Garden City Park is Ibrahim Amjad Ibrahim, 30, of Surrey.

Ibrahim was known to police and investigators believe his murder was targeted.

(Although IHIT said he was from Surrey, Surrey RCMP had said last July that he was from Coquitlam).

Kamloops CFJC Today reported that Ibrahim was present at the murder of gang kingpin Konaam Shirzad, a leader of the Red Scorpions gang, in Kamloops on September 21, but he was not injured.

RCMP Cpl. Jodi Shelkie told CJC Today that Ibrahim was not cooperative as a witness to the shooting.

IHIT Cpl. Frank Jang said: “Mr. Ibrahim was associated to gangs but to say these associations are the reason for his murder would be premature. It remains early in the investigation and investigators are working to determine motive.”

When Richmond RMCP found the body, it appeared the victim had sustained gunshot wounds. The death was deemed suspicious in nature and IHIT took conduct of the investigation.

IHIT is working closely with the Richmond RCMP, the Integrated Forensic Identification Section and the B.C. Coroner’s Service during this evidence gathering phase. 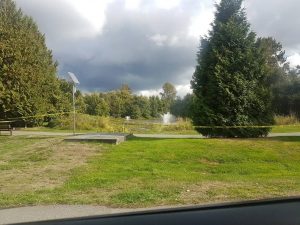 “Anyone in the area of the parking lot of Garden City Park during the overnight period of October 9 is asked to contact IHIT.” Cpl. Jang said. “This is yet another life that has been lost too soon. It is a reminder that if you are involved in or associated to criminal activity, then you are not immune to its inherent dangers.”

On July 31, Surrey RCMP had cautioned the public against interaction with five individuals, including Ibrahim, who had been the targets of shots fired incidents over the previous two months.

The five had been the victims or intended victims of shootings that had occurred in Surrey in summer.

“They have each been spoken to by investigators and, although their lives are in danger, they have not provided statements to police. As such, Surrey RCMP believes these people have become a risk to public safety,” the RCMP said at the time.
The others were Karman Singh Grewal, 25, from Vancouver; Manbir Singh Grewal, 28, from Coquitlam; Indervir Singh Johal, 23, from Surrey; and Harmeet Singh Sanghera, 23, from Surrey.
“Each of these individuals has refused to provide information to police on these violent incidents,” said Assistant Commissioner Dwayne McDonald, Surrey RCMP Officer in Charge. “At this point, we must assume that these men continue to be targets and, as such, we are advising the public to be cautious of any interaction with these five individuals.”