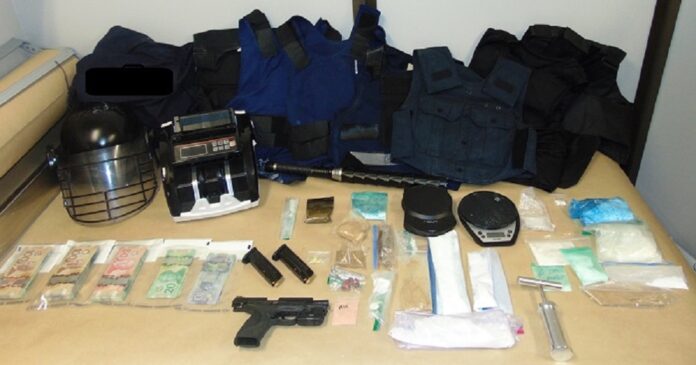 CHILLIWACK RCMP seized illegal drugs and firearms during the execution of a search warrant.

Officers seized bulk quantities of drugs believed to be fentanyl, heroin, cocaine and methamphetamine. Police also seized firearms, body armour, ammunition and paraphernalia associated to the preparation and sale of illegal drugs during the search.

The RCMP will forward, following a thorough review of evidence, all circumstances of the investigation in a report to the Public Prosecution Service of Canada (PPSC) for their assessment of CDSA charges.

Tips on how to spot a crime house or drug dealer in your neighbourhood:
• Regular and unusual traffic patterns
• A high pedestrian volume to a residence day and night
• Traffic stops where a resident comes out to talk briefly with the occupants of a vehicle

RCMP remind everyone who witnesses anything they believe to be suspicious in nature to contact the Chilliwack RCMP at 604-792-4611 or, should they wish to remain anonymous, call Crime Stoppers at 1-800-222-8477 (TIPS).

Two arrested and charged in 2019 homicide of Jordan Smyth

Two stabbings in Chilliwack on Sunday