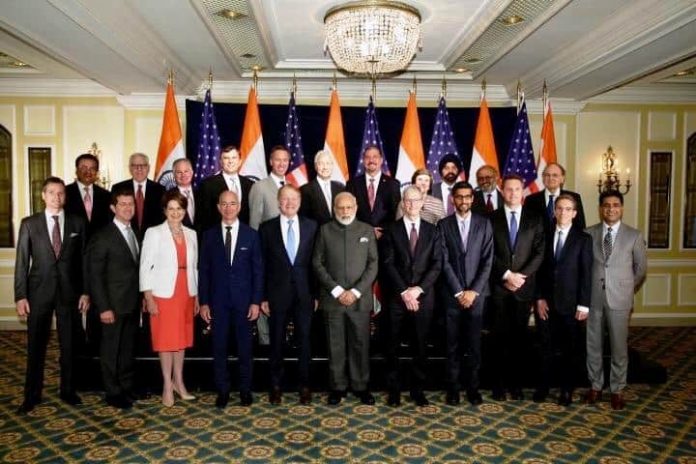 Washington (PTI): Prime Minister Narendra Modi on Sunday said India has now emerged as a business-friendly destination, more so with the upcoming implementation of landmark GST beginning next month, while asking CEOs of top US companies to invest in the country.

Modi, during his meeting with the CEOs of top 20 American firms, also said that India attracted the largest amount of foreign direct investment (FDI) as a result of the NDA government’s policies in the last three years.

In the round table interaction with the group that included Tim Cook of Apple, Sunder Pichai from Google, John Chambers from Cisco and Jeff Bezos of Amazon, he spoke about the reforms undertaken by his government, saying they numbered over 7,000, and were aimed at “ease of (doing) business and minimum government, maximum governance.”

“Interacted with top CEOs. We held extensive discussions on opportunities in India,” Modi tweeted after the meeting that lasted for about 90 minutes.

He said the world is now focused on India’s economy, especially in areas like manufacturing, trade, commerce, and people-to-people contact, due to a young population and a rising middle-class.

“The whole world is looking at India. 7,000 reforms alone by GOI for ease of (doing) business and minimum government, maximum governance,” Gopal Bagley, spokesman of the Ministry of External Affairs quoted Modi as saying.

India’s growth presents a win-win partnership for the country and the US, and American companies have a great opportunity to contribute to that, Modi told the CEOs.

“If America becomes stronger, India will be a natural beneficiary,” he said.

On the Goods and Services Tax (GST), Modi said its implementation is a complex task that may well turn out to be “a subject of studies in US business schools.”

“This shows India can take big decisions and implement them swiftly,” he said.

During the interaction at the Willard Hotel, where he is staying, Modi gave a patient hearing to the wish-list of the top bosses.

Modi said his government has focused on improving the quality of life of the people, and added that working towards this end requires a global partnership.

Therefore, he added, India is working on principles like ‘Minimum Government, Maximum Governance’, efficiency, transparency, growth and benefit for all.

The CEOs lauded the Prime Minister’s initiatives of demonetisation and digitisation of economy and the GST, the spokesman said.

The CEOs also expressed support for ‘Make in India’, ‘Digital India’, ‘Start Up India’ and other flagship initiatives of the government.

According to Indian officials present at the meeting, several CEOs showed willingness to be partners in skill development and education initiatives in India. They also mentioned social initiatives being undertaken by their companies in India in women empowerment, digital technology, education and food processing.

Infrastructure, defence manufacturing and energy security also came up for discussion during the meeting.

“CEOs outline priorities in India and suggestions for mutually beneficial partnerships in line with inclusive growth,” he said, adding that they reaffirmed their commitment to growing with India and attested to its attractiveness as an FDI destination.

Pichai told reporters after the meeting that they were excited about investing in India.

Praising the steps being taken by the Indian government in the last three years, he said the US companies are looking forward to the roll out of the GST.

“Good,” said Cook as he emerged out of the meeting.

The US-India Business Council (USIBC) president Mukesh Aghi said the CEOs praised the reforms being undertaken by the Prime Minister and underscore his efforts to make India a business-friendly destination.

Responding to a question, Aghi said the H-1B visa issue was not discussed at the meeting.

Among other CEOs present at the meeting were Shantanu Narayen from Adobe, Ajay Banga from Mastercard, David Farr from Emerson, Doug McMillon from Walmart, and Punit Renjen from Deloitte Global, Jim Umpleby from Caterpillar, Alex Gorsky from Johnson and Johnson, Jamie Dimon from J P Morgan Chase, and Marillyn Hewson from Lockheed Martin. USIBC president Aghi was also present.