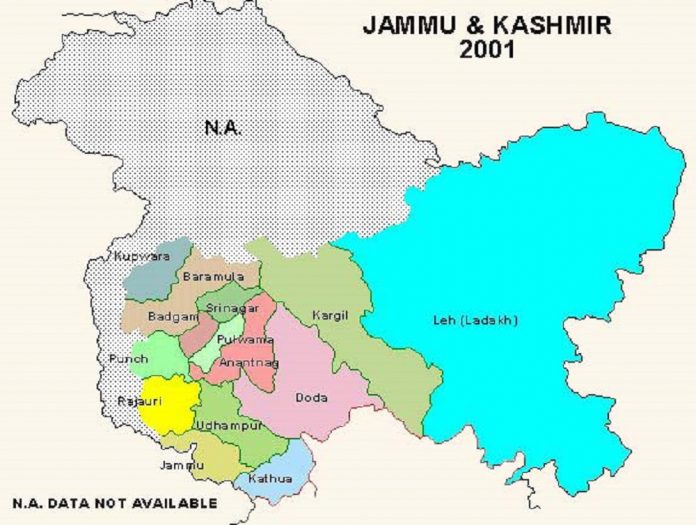 India’s Home Minister Amit Shah on Monday proposed in the Rajya Sabha (India’s Upper House) to revoke Article 370 of the Constitution in Jammu and Kashmir, ending the special status to the state.

Shah moved the amendment amid uproar by opposition members.

Shah said: “I am presenting the resolution to revoke Article 370 in Jammu and Kashmir except the first clause 370 (1).”

Following his speech, amid bedlam, the House was adjourned.

The UT of Ladakh will not have a legislature.

An official statement said: “The Ladakh Division of the State of Jammu and Kashmir has a large area but is sparsely populated with very difficult terrain. There has been a long-pending demand of the people of Ladakh to give it the status of a Union Territory to enable them to realise their aspirations. The Union Territory of Ladakh will be without Legislature.

Mehbooba Mufti, former chief minister of Jammu and Kashmir, tweeted: “Decision of J&K leadership to reject 2 nation theory in 1947 & align with India has backfired. Unilateral decision of GOI to scrap Article 370 is illegal & unconstitutional which will make India an occupational force in J&K.

“It will have catastrophic consequences for the subcontinent. GOIs intentions are clear. They want the territory of J&K by terrorising it’s people. India has failed Kashmir in keeping its promises.”

PAKISTAN on Monday said that it “strongly condemns and rejects” the announcement by India to abrogate Article 370 granting special status to Jammu and Kashmir and said that it will “exercise all possible options to counter it”.

The Pakistan Foreign Office said in a statement: “The Indian Occupied Jammu & Kashmir is an internationally recognized disputed territory.”

It said that “no unilateral step” by the Indian government can “change the disputed status” according to the United Nations Security Council (UNSC) resolutions.

“Nor will this ever be acceptable to the people of Jammu & Kashmir and Pakistan.”

It said that as party to this international dispute, “Pakistan will exercise all possible options to counter the illegal steps.”

“Pakistan reaffirms its abiding commitment to the Kashmir cause and its political, diplomatic and moral support to the people of Occupied Jammu and Kashmir for realization of their inalienable right to self-determination,” it said.

MEANWHILE, almost the entire opposition in the Lok Sabha on Monday unitedly opposed the Centre’s step to impose unprecedented restrictions in Jammu and Kashmir.

As soon as the lower House met and Speaker Om Birla read out a statement requesting Prime Minister Narendra Modi to modernize Parliament with new technology on completion of 75 years of Independence in 2022, the opposition, led by the Congress, raised the Kashmir issue.

Congress leader Adhir Ranjan Chowdhury urged: “Sir, you should at least give us our rights (to speak).”

The Speaker ignored the Congress plea following which members of opposition parties including the Congress, DMK, TMC, JKNC, RSP, AIMIM and SP were on their seat shouting “Dadagiri nahi chalegi”, “Tanasahi nahi chalegi”, “Prime Minister jawab do”, “We Want Justice” and “Stop Divide and Rule”.

Later, the agitating members of the Congress, DMK, SP and RSP massed near the Speaker’s podium.

But the TDP, BJD, BSP and YSR Congress members did not take part in the protest.

Amid the din, the Speaker started proceedings of the House and amendments made by the Rajya Sabha in the National Medical Commission Bill, 2019 and the Motor Vehicle (Amendment) Bill, 2019 were passed.

The government later moved the Transgender Persons (Protection of Rights) Bill, 2019 for its passage amid pandemonium.

The Speaker then requested the opposition members to return to their seats.

Meanwhile, Parliamentary Affairs Minister Arjun Ram Meghwal urged the opposition members to go back to their seats and proposed that “our Defence Minister (Rajnath Singh) is ready to speak on any issue”.

But the opposition continued their protest.

IN the backdrop of the Centre’s decision to scrap Article 370 which gives special status to Jammu and Kashmir, the Union Home Ministry on Monday issued an advisory to all states to put security forces and law enforcement agencies on maximum alert.

As per the order, requisite measures may be taken to ensure that peace and communal amity is maintained in all parts of the country and special attention may be paid to communally sensitive areas.

The order stressed that special care should be taken to ensure the safety and security of residents of Jammu and Kashmir, especially students, in various parts of the country.

“Adequate publicity may be given to the measures taken by state governments, Union Territories to inspire confidence in the sections concerned and to sensitize the public against any mischief or breach of peace.”

State governments and Union Territories were also told to tell their law enforcement agencies to maintain vigil against circulation of false, unverified news, rumours and unscrupulous messages on social media