JOHNNY Steven Drynock, 22, has been charged with the first-degree murder of 29-year-old Birinderjeet Justin Bhangu who was shot and killed on March 13 while seated in his vehicle in the parking lot of the Comfort Inn Hotel in the 8200-block of 166th Street in Fleetwood, Surrey.

Surrey RCMP and the Surrey Fire Department attended and made all efforts to save Bhangu. He was transported to hospital and pronounced dead shortly after.

IHIT Staff-Sgt. Jennifer Pound said back then: “Mr. Bhangu is known to police and, while a motive hasn’t been confirmed, it is believed that this shooting was as a result of his criminal lifestyle.” 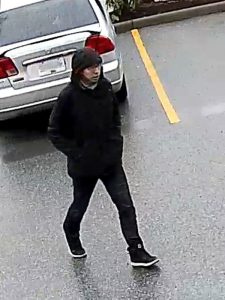 *Bhangu was driving an Acura MDX and pulled into a parking spot in front of the hotel at 2:22 p.m.

* The suspect was driving a Nissan Pathfinder and was backed into a parking spot close by.

* At 2:23 p.m. the suspect exited his vehicle and approached Bhangu from the driver’s side of the vehicle.

* While approaching the vehicle, the suspect began shooting at 2:24 p.m.

* The suspect ran back to his vehicle and fled the parking lot westbound, making a right hand turn onto Fraser Highway.

*The Nissan Pathfinder, driven by the suspect, was recovered in Kelowna the following day (March 14).

On Wednesday, Pound said that on March 17, exactly two months ago today, IHIT released a surveillance photo of a male suspect believed to be the shooter.  As a result of this, information was received that identified the suspect to be Drynock.

“Following two months of exhaustive work and intensive evidence gathering, the Integrated Homicide Investigation Team has received charge approval for first degree murder against Mr. Drynock,” said Pound. “The media and the public played an integral role in assisting IHIT identify the suspect and ensuring any issues surrounding public safety were not overlooked.”

Drynock has been in custody since April 8 on an unrelated matter in Merritt, B.C.  He is scheduled for his first court appearance in Surrey on Friday (May 19), in relation to the first-degree murder charge.

Pound said: “IHIT and Surrey RCMP recognized the need to work around the clock to locate this shooting suspect and it is as a result of police partnerships, thorough communication and extreme investigative commitment that a first degree murder charge has been secured today.

“Thank you to the public and to the media for recognizing these priorities with us. Your vigilance has resulted in accountability and justice being served for such a brazen act.

“IHIT will continue to collect evidence and speak with further individuals who may have knowledge about this homicide.  Further details such as motive, criminal links, or suspect/victim relationship will all be reserved for the court process ahead.

THIS devastating incident is something that has changed our lives forever; it is with heavy hearts that we mourn the loss of our son, our brother and our friend.

Birinder was a very loving, respectful and warm-hearted individual who did not deserve to be taken from us so soon in this horrendous way.

Although, Birinder’s loss will forever impact our lives in a way that even we will truly never understand, the first-degree murder charge has brought a sense of relief to all of our hearts.

We would like to thank the members of the Integrated Homicide Investigation Team and the public for all the hard work they have put into this ongoing investigation since March 13, 2017.

Bringing forward these charges today on the individual responsible for this senseless act of violence, has brought some justice to Birinder’s family and loved ones.