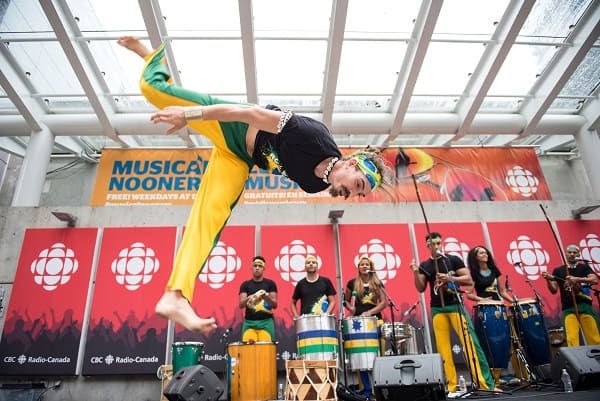 “I can’t think of a better band than a local favourite like Said the Whale to kick off opening day. Their upbeat music will put everyone in a good mood all day long,” remarks Jon Siddall, lead producer for the series. “Every year we have the top ‘must-listen’ to bands on the Musical Nooners stage and this year is no exception. There will be something to make you tap your toes and sing out loud, no matter your musical tastes.”

And mark your calendars, following last year’s overwhelming popularity and success, Kids’ Day will be back this year on August 2. Will Stroet of Will’s Jams from CBC Kids will be on stage to delight young fans and their parents alike. Guests can mingle with Scout from CBC Kids’ and Parka from Parks Canada, make creations at the craft centre and participate in an adventurous scavenger hunt.

“Musical Nooners has become a paramount summer show for local music fans and families alike. Attendees always tell us how it’s one of their must do activities for the season; we are proud and humbled to be part of Vancouverites’ lives,” says Johnny Michel, senior managing director, CBC British Columbia and Alberta. “We look forward to showcasing the city’s talented musicians and providing unforgettable experiences on our CBC Vancouver plaza all summer long.”

Now in its 8th year, the CBC Vancouver’s Musical Nooners free concert series runs Monday – Friday, from noon to 1 p.m., at the CBC Broadcast Centre at 700 Hamilton Street (between Robson and Georgia) from July 7 – August 25.

For more information on the Musical Nooners series and CBC in British Columbia, go to www.cbc.ca/bc or follow on Twitter @CBCVancouver or #musicalnooners.