THE Committee of Progressive Pakistani Canadians took the initiative in organizing a vigil on Friday, June 11 at in Surrey’s Holland Park to pay tribute to the innocent victims of the London, Ontario, terrorist attack.

Four  members of a family, — Yumna Afzaal, 15, Madiha Salman, 44, Talat Afzaal, 74, and Salman Afzaal, 46 — were killed when truck driver Nathaniel Veltman, 20, struck them in London, Ontario, on Sunday in what police said was “a planned, premeditated” attack because they were Muslims. Nine-year-old Fayez Salman was the only surviving victim.

A raft of community organizations (including but not limited to the names mentioned at the bottom) came forward to join the vigil to collectively express their deepest sympathy and support to the extended families of the Afzaal family.

“Today, it is Islamophobia, yesterday it was indigenous communities, tomorrow it could be to some other minority group. This should STOP! This must STOP! Let’s work collectively to change the narrative here and send a clear message to the racists and white supremacists and extremists that WE STAND TOGETHER against evils of all sorts, no matter how much you oppress us,” said the organizers.

They added: “Through this vigil, we want to send a clear message to the world and the community at large that we are united against any kind of hate, bigotry and discrimination and will raise our voices loud to be heard by our cowardly enemies.” 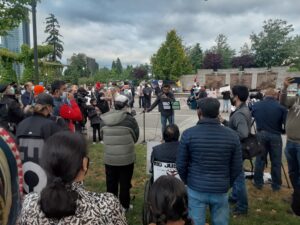 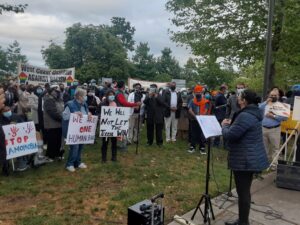