LET Muhammad Lila tell the story as shared by victim Noor Fadel on her Facebook:

When 21-year old Jake Taylor saved a teenage girl from being attacked in Vancouver, he didn’t expect anything in return.

So we surprised him with the Best Christmas Ever.

When 18-year old Noor Fadel was assaulted on the train, everyone sat and watched.

When the attacker said he wanted to “kill all Muslims.” everyone sat and watched. 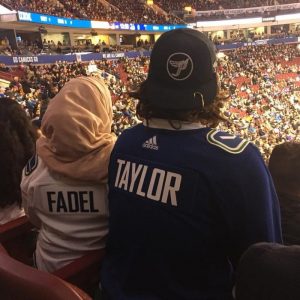 Except for Jake Taylor.

He grabbed the guy, told him to “get the F— out of here,” and stayed with Noor until the police and paramedics arrived.

As someone said: “In Canada, we don’t put up with that SH–”

Jake never asked for anything in return. He’s shy and doesn’t like the spotlight.

His story went viral on Facebook, reaching millions of people. More than 30,000 people sent in messages of support. There was a crowdfunding campaign to say thank you. I flew in myself, to give him a handmade, leather-bound book with thank you letters from around the world.

And nothing can top what the Vancouver Canucks did for him.

The leadership team wanted to honour him, and Noor, so they for them to be special guests at Rogers Arena for a game on Hockey Night in Canada. Jake had no idea what was about to happen. Midway through the game, during a commercial break, the arena went quiet. The announcer began the story of what Jake did, and how he’d become a hero.

Jake got one of the loudest ovations I’ve ever seen at a hockey game.

I kept thinking it would be short, and that everyone would want to get back to the game. But they didn’t. They kept cheering and cheering. When I looked over to the Canucks bench, I saw some of the players looking up at the screen and cheering.

There’s a lot of bad stuff in the world. When we see something good, we should encourage it.

When we do the right thing, everyone wins.