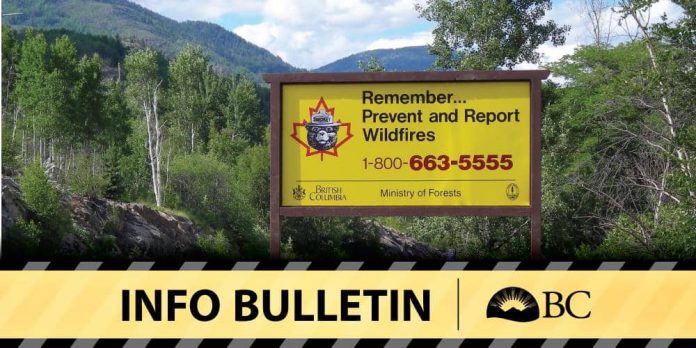 TODD Stone, Minister of Transportation and Infrastructure and Minister responsible for Emergency Management BC, on Friday evening announced a provincial state of emergency to ensure a coordinated response to the current wildfire situation and to ensure public safety.

On Friday alone there have been 56 new wildfire starts throughout the province. Evacuation alerts and orders have been issued for Ashcroft, Cache Creek and Princeton. These are in addition to the evacuation orders and alerts issued yesterday for 105 Mile House and 108 Mile House. The extended weather forecast is calling for continued hot, dry weather, with risks of thunderstorms in many parts of the province.

Given the current wildfire situation and the expected increase in wildfire activity, the Province is taking this extraordinary measure of declaring a provincial state of emergency.

This is an urgent situation and public safety is the top priority. The Province will continue to keep the public informed in this rapidly evolving situation.

The state of emergency gives agencies such as Emergency Management BC, the Fire Commissioner, the Ministry of Forests, Lands and Natural Resource Operations and the RCMP authority under the Emergency Program Act to take every action necessary to fight these wildfires and protect residents and their communities.

Declarations of provincial states of emergency are issued by the minister responsible under the Emergency Program Act. The last provincial declaration of state of emergency was issued in August 2003 to deal with wildfires.

For information on evacuation orders and alerts, visit Emergency Info BC: https://www.emergencyinfobc.gov.bc.ca/

THE RCMP announced that their resources from around the province are being deployed to assist with a multitude of fires burning in both the Southeast and North Districts of the province.  The RCMP’s primary responsibility is to support emergency operations and ensure the safety of people and the communities.

“While we recognize your frustrations with not being permitted to be in or return to your residences and communities, we ask for your continued patience and understanding”, said Cpl. Janelle Shoihet, spokesperson for the BC RCMP.  “The fire situation is fluid and continues to unfold and your safety remains our priority. Directions given by emergency personnel are done so to ensure the safety of those living in the communities affected by the fires, communities adjacent to those areas and the emergency personnel working in the affected areas”.

There are numerous road closures in effect, and RCMP are asking people to avoid evacuation areas to permit those attempting to leave the area, to do so efficiently and safely.

The most up-to-date information with respect to;

–          Wildfires can be found at www.bcwildfire.ca or on Twitter @BCGovFireInfo

–          Evacuation Orders can be found at www.emergencyinfobc.gov.bc.ca or on Twitter @EmergencyInfoBC

The RCMP in BC are monitoring the situation and working closely with the BC Wildfire Service and other first responders to determine resource needs.  Additional police resources will be deployed to support emergency operations.  The RCMP also has plans and support in place to ensure police response to non-fire related calls are not impacted.

BC RCMP will continue to provide updates at www.bc.rcmp-grc.gc.ca, on Twitter @BCRCMP and on Facebook at BCRCMPNews

PREMIER-DESIGNATE John Horgan issued the following statement about the wildfire situation in the B.C. Interior:

“With serious wildfires threatening several important communities in the B.C. Interior, my thoughts are with those in the affected communities, and the brave firefighters and emergency responders who are working hard to contain the fires and protect homes and lives.

“To those who have lost their homes and to those who are under evacuation order, I want to send my comfort at this difficult time. Emergency response teams are doing everything possible to meet your needs and I am being updated on the efforts to fight the fire and assure your safety.

“I urge everyone to follow the instructions of local emergency response officials and to do their utmost to avoid interfering with firefighting efforts. People are putting their lives on the line to save our neighbours and our communities, we have to do our part to make their jobs easier.

“I know British Columbians across the province stand ready to lend a helping hand. Whatever these wildfires throw at us, we will overcome it.”