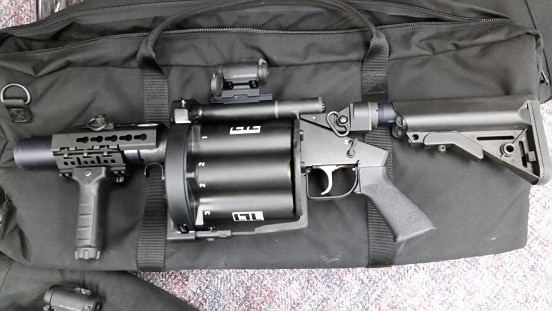 RCMP breathed a sigh of relief after a member of the public reported on Monday afternoon that they had recovered a 40MM Abrams Airborne Mfg Inc. Less Lethal Multi-Launcher (gas gun) and a large green case containing related ammunition as a result of media coverage.

RCMP connected with them and confirmed that all missing items had been accounted for. The review of the incident is continuing.

RCMP said they would like to thank the media and the public for their assistance in the quick recovery of the equipment.

Earlier on Monday, RCMP had announced that they believed that the items fell through the insecure back hatch of a truck canopy on July 23 (Sunday) shortly before 7:30 a.m. in the area of the Golden Ears

Bridge.  The driver of the truck, a member of the Integrated Emergency Response Team, was alerted to the open latch by a passing motorist.  The police officer stopped to check the content of the truck and noticed a green camouflage bag containing the multi-launcher missing.  RCMP said that also missing could be a black backpack containing assorted electronic equipment.

A thorough search of the area was immediately conducted but the items weren’t located. The RCMP then asked the public for their help.