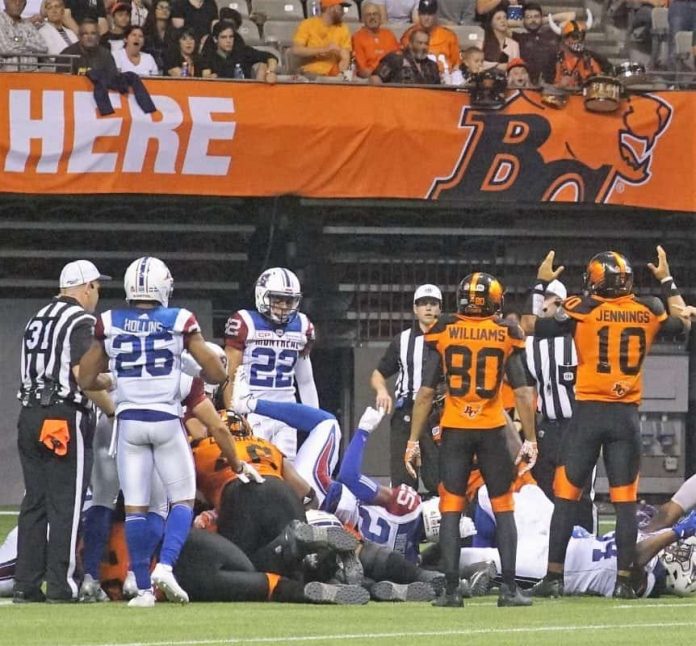 IT was eerily similar to the week three victory in Hamilton. Only this time it was Jonathon Jennings replacing Travis Lulay on the game’s opening series. And it appears the injury to Lulay might be significantly more serious. On the second play from scrimmage, Lulay suffered a right injury while scrambling for the first down marker and his latest stint as starting quarterback was over before it really began.

Jennings threw for 295 yards and two touchdowns as the BC Lions (6-5-0) cruised past the Montreal Alouettes (3-8-0) 41-18 for a win they desperately needed to keep pace in this dogfight of a Western Division.

It all started when Jennings capped off a ten-play, 89-yard drive with a touchdown strike to Emmanuel Arceneaux. The Saginaw Valley product also had a touchdown toss to Chris Rainey, while Jeremiah Johnson added a pair of majors on the ground to help the home side win for the first time in 35 days.

“It’s huge. We’ve obviously been on a three-game losing streak and we had to turn it around. I’m glad we did it tonight and it’s just good for the team,” said Jennings.

“We’re all here to do a job. As a second-string quarterback you know you’re the next play away so I had to be prepared. I worked all week to prepare myself for the opportunity if it came and I came in and did a decent job tonight.”

Along with the solid performance, the well-being of Lulay was a big talking point afterward.

“I’m at a loss for words. It’s kind of crazy. That’s the sad part about this game is the injuries like that, especially how hard he’s been working and how well he’s been playing. It’s tough to see,” said an emotional Jennings.

The eight-year veteran tried to be optimistic, but you could sense he knew his fate wasn’t good.

“Significant damage. We’ll have to do an MRI to confirm what happened exactly,” explained Lulay to reporters.

“Things happen. I’ve obviously dealt with stuff like this before. It’s personally disappointing obviously. I was just scrambling, was short of the first down. I cut inside of the linebacker and felt my knee shift. It really happened before the contact. I got up and it hurt,” added the CFL Most Outstanding Player.

Wally Buono has been with Lulay since the start. The CFL’s all-time wins leader also had a difficult time processing what had transpired.

“Obviously it’s devastating for us, for him, our fans too. It is a very serious injury and I guess once the doctors do the MRI and they have an exact diagnosis, that’s pretty much it. Sports is cruel and at the end of the day you’re a professional athlete, you need to put aside your emotions and go play,” said Buono.

As cruel as that sounds, that’s just how it is. Jonathon didn’t have a choice and the thing about it was he was prepared and he was great. That’s all you can ask of the young man. I can’t imagine the last month or so has been pleasent for him and yet he didn’t let that phase him. I said ‘Jonathon, this either going to make you a better quarterback or it’s going to eventually hurt you.’ Obviously tonight he was a much better quarterback.”

Jennings’ performance was, in a nutshell, the type that won him the starting job nearly two years ago and also helped him emerge as one of the stars in the league in 2016. The hope now is that it remains that way week in and week out.

Arceneaux led all receivers with 108 yards, while Bryan Burnham was right behind him at 101. Johnson had his most productive rushing performance of the year with 91 yards on 19 carries to go along with the pair of touchdowns.

Anthony Gaitor reaped the benefits of an acrobatic field goal block by Chris Rainey to close out the first half. Gaitor’s scoop and score gave the home side a 26-3 lead and gave the Alouettes an indication it would indeed be a long night.

“I have to give all the praise to Rainey man, he made that play and I just finished it off,” explained Gaitor.

“I want to thank Rainey for the block and thank God for making that happen. You can;t take any plays off. That was crucial going into halftime. Special teams is a big part of the game.”

It was Gaitor’s second touchdown as a Lion, after hitting pay dirt on an interception return in a victory over Ottawa in October of 2016.

“Chris, God bless him, is always on my back about letting him play more, letting him do more,” said Buono.

“He wants to cover kicks, he wants to do everything. ”

“Why do bad things happen to good people?” It’s a thought that must be racing through Lulay’s mind once again.