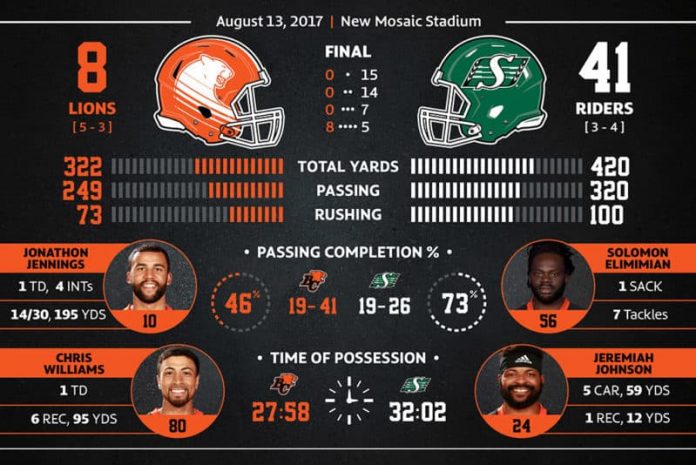 Regina, Saskatchewan: Jonathon Jennings is a young quarterback with the type of veteran savviness every player should aspire to. So as you might expect, the young pivot was not sugarcoating anything after tonight’s loss at the hands of Saskatchewan.

He and the offence fell behind the eight-ball early and never recovered in a 41-8 loss to the Roughriders in front of a raucous, sold out crowd at Mosaic Stadium.

Jennings managed just 14 completions and threw four interceptions, including one to Ed Gainey that was returned 49 yards for a touchdown. Gainey finished the night with four takeaways for a Rider’s defence that never let up.

Riders’ starting quarterback Kevin Glenn improved from his effort last week, passing for 327 yards and three touchdowns as the home side jumped out to a 29-0 halftime lead and never looked back.
“We’re going to figure out how we can get better obviously, but it’s only one game,” added Jennings.
“I had some big mistakes that made it tough, but they were dropping deep and switching up coverages, giving us man (coverage)at times and they got pressure at times. That made it tough.”
Travis Lulay replaced Jennings for the second quarter before Wally Buono went back to his original starter for the second half.
“I think we have to accept the responsibility. We knew we were coming into a hostile place, we knew this team was going to be a lot more motivated than it was last week and, unfortunately, our guys didn’t get the message,” said Buono.
“They couldn’t match Saskatchewan’s intensity and we had too many bad plays early.”
They broke the shut out when Jennings completed a nice, 56-yard bomb to newcomer Chris Williams. It was his first touchdown catch in his second game with the club. At the end of the day it was one of just a few positives for a Lions offence that seemed out of sync all game. They did not pick up a first down until there was 9:32 remaining in the first half.
“You have got to give Chris (Jones) and his group credit. Guys played hard, they played physical and we were no match for them tonight.”
The Lions fall to 5-3 on the season and return home Friday night for a critical Western Division matchup against the Calgary Stampeders. Perhaps the short week may serve as a positive and they can file this one away sooner as a result.
“We’re ready to wipe this clean and move on to the next game,” added Jennings. “We’ve got to get into the meeting room and get better. Like I said, it starts with me.”

7– Number of turnovers committed by the visitors: five fumbles, one interception and a turn over on downs just prior to the half.

10– Total number of rushing attempts by the Lions. Falling behind early may have had something to do with it.

76– the completion percentage for Glenn. He finished 19 for 25 in the first victory over the Lions in green.