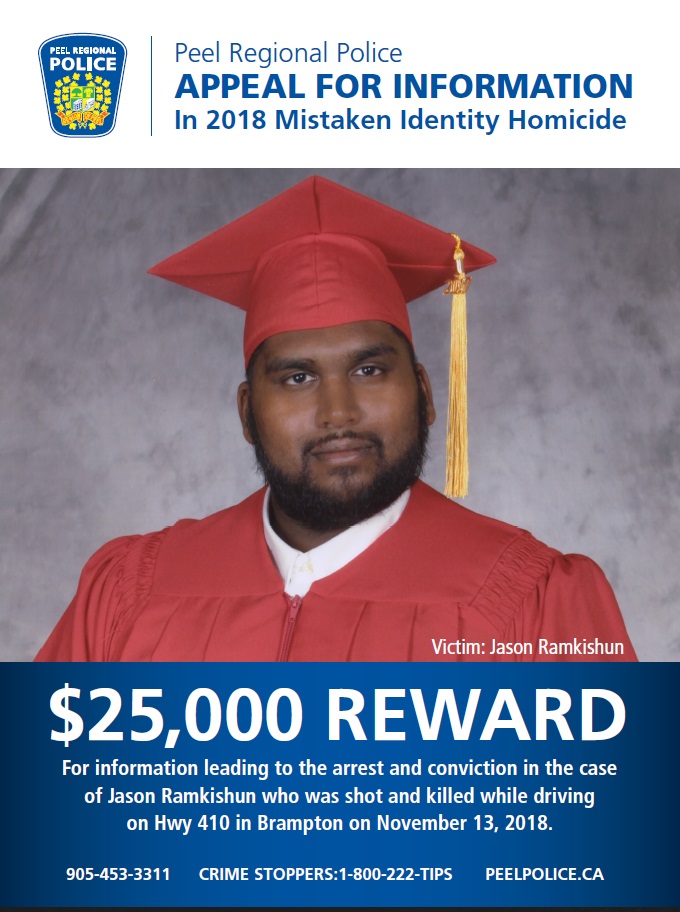 IN an attempt to further advance their investigation into the 2018 murder of Jason Ramkishun, 23, of Brampton, Peel Regional Police are offering a $25,000 reward. The reward is for information that leads to the arrest and conviction of those responsible.

On Tuesday, November 13, 2018, at approximately 12:55 a.m., Ontario Provincial Police officers responded to reports of a single vehicle accident on the northbound Highway 410 near Courtney Park Drive, Mississauga.  Police located a vehicle in the ditch and it was determined that the lone occupant had been shot. The victim, who was identified as Ramkishun, was transported to Sunnybrook Hospital where he later succumbed to his injuries. The Peel Regional Police Homicide and Missing Persons Bureau has taken conduct of the investigation.

On Tuesday, November 20, 2018, shortly after 11 p.m., a male victim was driving his 2013 Honda Accord northbound on the 410 just north of Derry Road when a vehicle pulled alongside him and unknown suspects started shooting.  The victim’s vehicle was struck numerous times and he was hit by gunfire.  The victim was able to drive himself to Brampton Civic Hospital where he was later transported to Sunnybrook Trauma Center to be treated for a gunshot wound.  He has since recovered from his injuries.

The firearm involved in the homicide of Ramkishun on November 13, 2018, and the shooting incident on November 20, 2018, was recovered in August 2019 in an unrelated investigation.

Investigators are appealing to the public who have information into these shootings to contact Peel Regional Police, Homicide and Missing Persons Bureau.  Police believe a number of people have knowledge of what took place and could help us solve this case.

Anyone with information relating to this investigation is asked to call investigators at the Homicide and Missing Persons Bureau at (905) 453-2121, ext. 3205. Information may also be left anonymously by calling Peel Crime Stoppers at 1-800-222-TIPS (8477), or by visiting www.peelcrimestoppers.ca.

ONTARIO: Third arrest made in Brampton homicide of Sangita Sharma