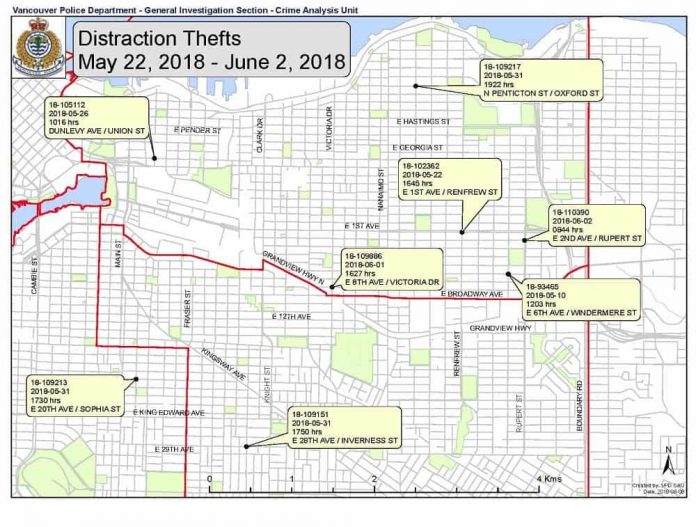 VANCOUVER Police are warning the public to be vigilant after receiving reports of eight “distraction thefts” in just under a month.

The thefts involve strangers getting out of vehicles and approaching men and women who are wearing visible necklaces and rings. The thieves make various excuses to make physical contact with the victims. Some suspects are conversational and offer free or inexpensive jewelry, while others appear frantic, asking for directions.

“These thieves are smooth and quickly get into your personal space. Victims usually don’t realize their jewelry has been taken until after the crooks are gone,” says Constable Jason Doucette. “We are encouraging family and friends to tell the seniors in our communities about this scam, and remind them to be very cautious if someone enters their personal space.”

Just before 5 p.m. on May 22, near East 1st Avenue and Renfrew, a 70-year-old Chinese woman was approached in her driveway by two suspects who began placing rings on her hands and a necklace around her neck. Even though this woman pulled away, the suspects still managed to get away with a valuable necklace.

During another incident on May 30, an 80-year-old Italian woman was approached in front of her home, near Nanaimo Street and Oxford Street. A frantic woman asked for directions to the hospital for her sick child. The suspect hugged the woman to thank her and tried to steal her necklace. The victim pushed off the suspect and was able to grab her jewelry back.

A specific suspect description is not available at this point, as there appear to be a number of people involved.

Anyone who is approached by these suspects is asked to call 9-1-1 immediately. Those with information about these types of crimes, or who have been a victim and not yet made a police report, are asked to call Vancouver Police investigators at 604-717-0613.