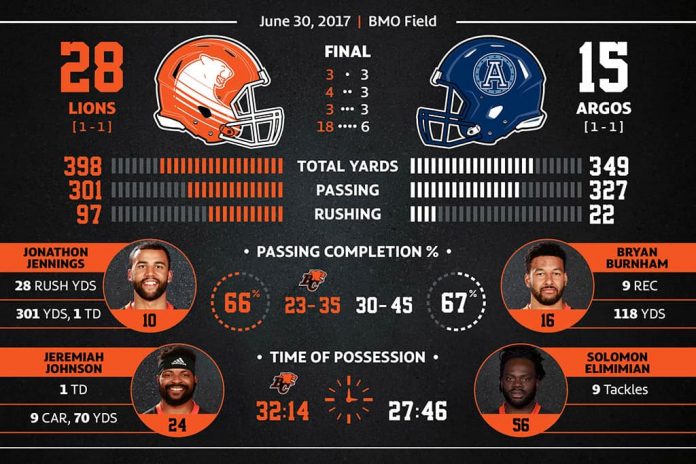 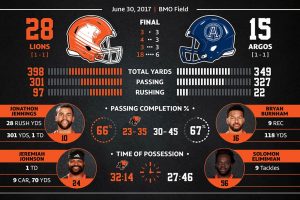 THE sleeping giant awoke in the 4th quarter and it was bad news for the hometown Argonauts. Jonathon Jennings’ touchdown pass to Chris Rainey opened the floodgates and a four-yard run by Jeremiah Johnson put the exclamation point on a 28-15 victory on Friday at BMO Field.

Jennings finished his night 23 of 35 for 301 yards, while Bryan Burnham led all receivers with nine catches for 118 yards and also passed the 2,000-yard mark on his career. His best play of the night was a leaping grab to set them up with a first and goal before the Rainey score.

“We just came out and executed. The first half we were kicking ourselves in the butt,” said Burnham in a joyous Lions locker room.

“Jon is awesome, he really is. All the hits he takes, he could easily shut it down and start pointing fingers, but he’s always coming back and looking at the iPad and getting us ready to go back out. Hats off to Jonathon for keeping that positive attitude.”

A defence that played lights out spearheaded the second half heroics; Ronnie Yell’s interception was the club’s first takeaway of 2017. The Johnson touchdown was set up by a DeQuin Evans forced fumble deep in Argos’ territory. The aggressive play on defence was the benchmark Wally Buono and his staff has been working towards since training camp. Yell chipped in five tackles, while Craig Roh had two of the four sacks on Ricky Ray. The leader of it all, as you might expect, was Solomon Elimimian. He had nine defensive stops and passed Dante Marsh for first on the club’s all-time list. He now has 589 in his illustrious career.

“It’s a blessing, “ said Elimimian of the latest record.

“As long as you win it’s a good thing because that’s what it’s about. This field is historical for me because this is where I set the single game franchise record with 14 tackles ( in August of last year). To do that is a blessing and I’ll take it with the win. The biggest thing I like is the fact nobody quit. The mindset was good all week.”

The Lions took a 7-6 lead to the locker room at halftime and were trailing 15-10 after Ray connected with Armanti Edwards for their lone major of the night. Jennings responded by marching them down the field in just six plays to pull back ahead on the toss to Rainey. Better late than never? You betcha.

The 1-1 Lions now head to Kingston, Ontario for four days of practice and down time before a date with the Montreal Alouettes on Thursday.

The Lions only took six penalties for 50 yards, a major improvement from the infractions last week. Discipline leads to great things.

“That was one of the things we discussed all training camp, was the need to get more turnovers. When you get turnovers you make the field shorter for your offence. Toronto has got an excellent defence and you’re not going to march the ball to often on them. A short field every once in awhile helps.”- Buono on his defence making a difference in this one.

Sometimes you have to grind it out. And that speaks to what the offensive line did by bouncing back after a rough first half when Jennings was sacked four times. The big men up front did a lot in terms of giving him more time on the 4th quarter marches. A job well done when they needed it the most.

Hat tip to Ty Long who was three for three on field goals, the longest coming from 47 yards out. He may want a couple of those punts back, but you can’t deny he has reaped the benefits of putting some extra work in this past week. This was a guy who was out on the practice field until 5:00PM on one of the days, putting his own individual work in.

Yell is indeed playing at another level right now. You can point to the end zone break up he had in the third quarter as a key turning point. The play on DeVier Posey forced the Argos to kick an 11-yard field goal and kept the visitors ahead 10-9. This was the same venue where he suffered his freak injury in 2016 and you can tell he was on a mission to make it a memorable game.

Speaking of that swagger, the addition of Evans brings a whole new nastiness to this defensive line. If two regular season games are any indication, the former Stampeder could go down as one of the league’s best free agent signings this past winter, and overall the defence made things more difficult for Ray the entire evening.

It was a night of milestones. Along with Elimimian and Burnham getting theirs, Marco Iannuzzi played his 100th career game and it was number 50 for Mike Benson. All of these individuals bleed orange and should be commended for the players and people they are.

See what happens when you get Rainey more involved in the offence? Great things happen.

Next Up! The Lions pay a visit to Percival Molson Memorial Stadium on July 6th to take on the Montreal Alouettes. Kickoff 4:30pm. Listen to TSN 1040 Vancouver, watch it on TSN and follow us along on Social – Twitter, Facebook, Instagram.