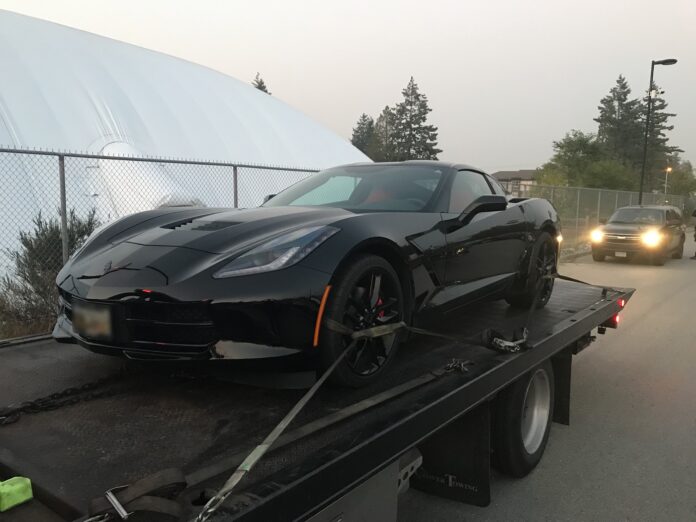 A Surrey Gang Enforcement Team (SGET) traffic stop in Whalley last week on Friday resulted in a significant seizure of cash and a high-end vehicle.
Shortly after 6 p.m. on September 11, SGET officers were conducting patrols in the 10000-block of King George Boulevard, when they pulled over a suspicious vehicle. Police observed one of the vehicle occupants sitting in the lap of another in the front seat of the two-seat black 2019 Corvette. The driver was issued a violation ticket under the Motor Vehicle Act for having too many passengers.

As the investigation advanced, police located numerous bundles of cash, estimated to be more than $50,000, and packages of suspected steroids, inside the vehicle. All three individuals, who are known to police, were arrested for possession of property obtained by crime. All three were released at scene and no charges have been laid at this time. The vehicle was seized and the investigation is ongoing.

This is the third time in as many weeks that SGET members have made substantial cash seizures of crime-related property as a result of vehicle interdiction. Previous traffic stops on August 31 and September 6 led police to seize more than $10,000 in cash.

“Seizures like this help reinforce the importance of continued pro-active traffic enforcement,” said Staff-Sgt. Ryan Element, acting Proactive Enforcement Officer, on Thursday. “Not only do our officers help promote safe road use through enforcement of the Motor Vehicle Act, but they increase their opportunity to intercept travelling criminals, interrupting criminal activity in Surrey.”

Anyone that has any information about the investigation, is asked to contact Surrey RCMP at 604-599-0502 or, if they wish to make an anonymous report, contact Crime Stoppers at 1-800-222-8477 or www.solvecrime.ca.