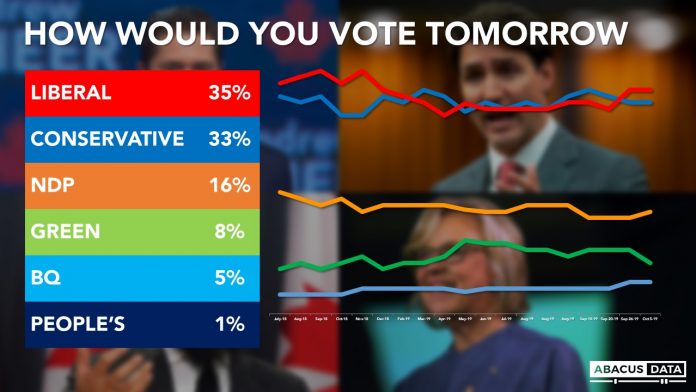 Here’s what we found:

Liberals have slight edge – two waves in a row

If an election were held at the time of the survey, the Liberals (35%) would capture slightly more support than theloc Quebecpois at 5% (19% in Quebec). Maxime Bernier’s People’s Party registers just 1% support nationally.

The regional races tell a clearer story of where the race stands. In Alberta and Saskatchewan, the Conservative Party has a 37-point lead, an advantage which has widened from 30 points in August. In the rest of the country, the Liberals have consistently led the Conservatives this year, and since August, a 5-point advantage has widened to 9 points.

There are signs that the Liberals are seeing support rise among women, and also indications that support for the Green Party is waning.

Conservatives continue to have a massive lead among voters who self identify as right of centre, including a 49-point lead among “centre-right” voters. Among centre-left voters, the Liberals have a 33-point lead over the NDP, 3 points more than a few weeks ago.

Perhaps the most encouraging sign for the Liberals is this: among the roughly half (49%) of voters who identify as being in the centre of the political spectrum, the Liberals now lead the Conservatives by 6 (35% to 29%) with the NDP in third at 16%.

Liberal Leader Justin Trudeau has 35% positive and 47% negative opinion across the country. Those numbers suggest his positives have regained 4 points from the drop after the blackface story emerged.

NDP Leader Jagmeet Singh is 32% positive and 25% negative, relatively steady from our last wave. Singh now has the most positive net impression of all the federal leaders at +7.

Green Party Leader Elizabeth May has 26% positive and 22% negative opinion. These numbers are weaker than we had been seeing for the Green Party leader earlier in the year.

In a head-to-head, more prefer Liberal government over Conservative one, especially among NDP and Green voters

Among NDP, BQ, and Green supporters, 60% or more would prefer a Trudeau government to a Scheer one.

More have made up their mind

According to Bruce Anderson: “Since our last wave, another 6% of voters say they have made up their mind about how they are going to vote, bringing the total who say their mind is made up to 69%. The recent movement has tended to be more beneficial for the Liberals outside Alberta and beneficial for the Conservatives in Alberta – underscoring a polarized debate around climate, carbon and related issues.

“The movement for the Green Party may signal a critical moment for Elizabeth May in Monday’s debate – her party has struggled when issues other than climate are in focus, and many climate concerned voters are concerned with avoiding a Conservative victory.

“The Conservative campaign is not making gains outside its base level of support. Part of this seems to be a reflection of how people are reacting to Andrew Scheer, but it also seems that the Conservatives have tended to stay close to the policy positions favoured by the base, rather than try to reach out to hesitant urban, female and younger voters. If anything those voters may have found reasons for their hesitancy to be reinforced by the Conservative campaign so far.

“For Trudeau and the Liberals, positive interest in the BQ and Jagmeet Singh are signals that they must concentrate not only on highlighting differences with the Conservatives.”

According to David Coletto: “With two weeks to go the race remains close, and we continue to see little movement in vote intentions. But beneath the surface, we see some shifts that might ultimately lead to some changes in how people vote.

“Impressions of Trudeau seem to have rebounded a little from the impact of the blackface photos. Scheer’s negatives continue to rise as the campaign progresses. His negatives are now only 3 points lower than Trudeau, a gap that stood at 7 points when the campaign began.

“Singh’s numbers have improved markedly throughout the campaign. Today, 1 in 3 have a positive impression of the NDP leader, a 7-point increase from a few weeks ago and the highest we have ever captured for Singh in our tracking.

“It’s a cliché to say that [Monday’s] debate could be decisive for the campaign. But given that 30% of the electorate is still up for grabs, the race is so close, and many haven’t yet tuned in, it’s hard not to feel that it will matter.”