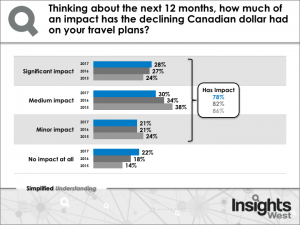 AS the country marks its 150th birthday, Canadians look at three destinations in the West as the most attractive places to visit, but three cities in the East and one in Alberta can expect to see more tourists in the next six months, a new Canada-wide Insights West poll has found.

In the online survey of a representative national sample, 60% of Canadians say they consider Banff and Lake Louise in Alberta as a “very appealing” destination for travel.

Two destinations in British Columbia are also regarded as “very appealing” by more than half of Canadians: Vancouver (54%) and Victoria (53%).

However, when it comes to expected travel in the next six months, Toronto is the top choice for Canadians, with one third (34%) saying they intend to take an overnight leisure trip there.

Three other cities will be visited by at least one-in-five Canadian tourists before the end of the year: Ottawa (26%), Montreal (23%) and Calgary (21%).

“It is no surprise to see Toronto, Ottawa and Montreal leading the way when Canadians are asked where they will travel, especially this year,” says Mario Canseco, Vice President, Public Affairs, at Insights West. “Calgary has joined these three long-standing classic destinations in Ontario and Quebec as the most likely cities to welcome visitors.”

More than three-in-four Canadians (78%) say the declining Canadian dollar has had an impact on their travel plans, including 86% of Albertans, 84% of Quebecers, and 83% of those aged 18-to-34.

In addition, 31% say they have changed their plans for travelling to the United States because of the current political climate in the country—a proportion that rises to 35% in British Columbia.

Three-in-five Canadians who say their travel plans have been impacted by the declining loonie (59%) plan to vacation in other areas of Canada instead of visiting the United States.

Across the country, 23% of Canadians say their household has been personally impacted by the current economic downturn. While the nationwide numbers are consistent with a similar survey conducted by Insights West last year, there are two areas that are having a tougher time with household finances: Alberta (50%, up eight points since 2016) and Manitoba and Saskatchewan (33%, up nine points since 2016).

One third of Canadians who have been personally affected by the economic downturn (33%) say they will still travel as planned, but spend less, while 21% have cancelled some of their travel plans.